Helping Kids Conquer Their Fears: Swimming on the Swim Team

Helping Kids Conquer Their Fears: Swimming on the Swim Team 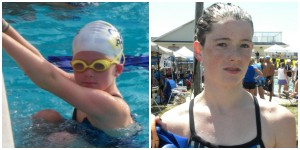 I spent hours in the pool as a child. Splashing about. Racing my dad and sister. Diving for rings with a friend. Happy times. Like me, my middle daughter has fun in the pool. But, unlike me, her swimming has a serious side. Very serious.

Until my daughter was five, swimming was all about splashing about and diving for rings. Everything changed the summer we joined a club with a summer swim team. Though my daughter still loved diving for rings in the pool, my very shy daughter revealed a never before seen competitive streak. That kid loved to win races. She wanted to win not one race, but ALL her races. I would look at her standing on the diving blocks, goggles firmly on her face, eyes looking straight ahead, and think “Who is this kid?” She was one fierce 5-year-old.

She wasn’t always fierce. At her first couple of swim practices, she was a shivering, quivering wreck. The water was so cold and she wanted no part of it. According to her, she was not getting in the pool…ever! I had no idea if she would ever conquer her fear of getting in the pool.

A teen swimmer saved the day. That teen girl did what my husband and I could not do. She got my daughter to get in the pool. Is there anything more encouraging to a little kid than an older kid giving them attention? With little fanfare and a ton of encouragement from her new found friend, my girl got in the pool. No fuss. No shrieking. She just got in. Once in, she started splashing around and even did some thrashy swim strokes. Wow!

A 5-year-old girl on the swim team did what I could not do. One afternoon, my daughter and this girl were splashing happily in the shallow end. Soon Jan wanted to swim to the deep end. I saw my daughter looking from her friend to the deep end and back again. Would she hang in the shallow end waiting for her friend to swim back? I knew she didn’t want to swim across the pool.

So you can imagine my surprise when with barely a backward glance, my kid took off after her friend. I was stunned. Would I have to dive in to rescue her? My daughter flailed her arms and thrashed her legs, but she wasn’t drowning at least. I’ll admit to white knuckling it as she swam towards the middle of the pool. She was keeping up. Soon she was over halfway across. I relaxed a little. More breathing, less hyperventilating. As she touched the wall, she turned to me and grinned. She was so happy that she swam across the pool with her friend. I couldn’t help grinning, too.

In one short afternoon, my daughter made it across the pool AND scored a spot on the swim team. Of course, I thanked Jan and her mom that day, but they probably have no idea how many times I have told this story over the years.

Fast forward almost 10 years, and that tentative, shivery, nervous wreck, “I’m not swimming across the pool…ever!” kid is now a competitive swimmer on no less than three swim teams. I don’t know where she would be today without the help and encouragement of friends.

In addition to being a swim team mom, Jill writes about her travels in D.C., Baltimore, and farther afield, at her blog: Musings from Me: Seizing Family Time. You can also follow her on Twitter @MusingsfromMe