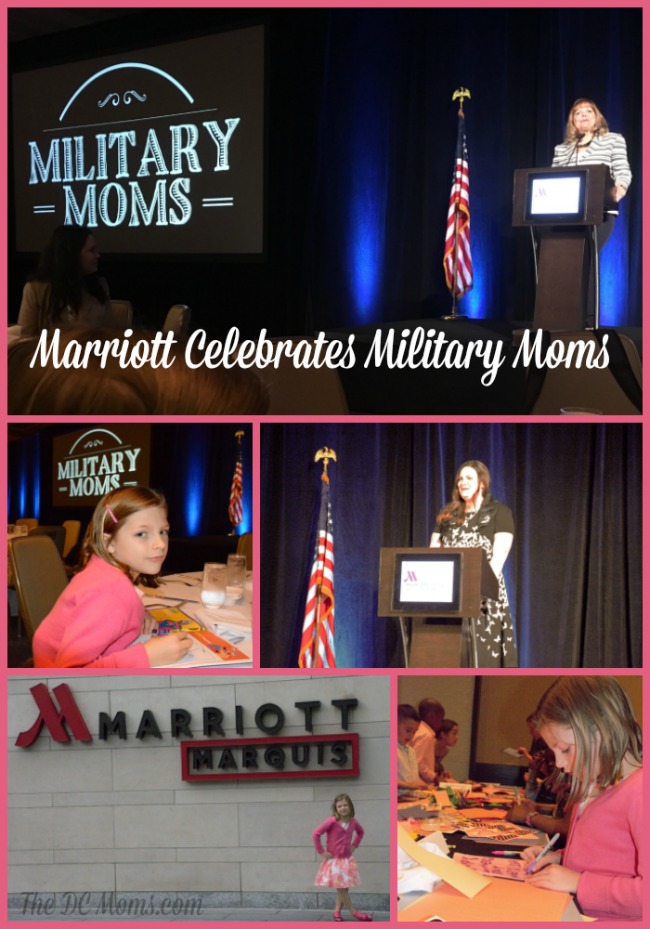 If you’re a mom in the DC metro area, you’re sure to have come across us, whether we live in your neighborhood, have children who go to school together, or just frequent the same Target on Tuesday each week. The DC area is full of military families that represent all branches of the service, from the army doctors at Walter Reed to the marines down at Quantico. And, yes, I am to proud say that I am part of this group; my husband is a “Coastie,” a US Coast Guard Officer currently stationed at Coast Guard Headquarters. The Saturday before Mother’s Day, my daughter and I had the opportunity to attend the third annual Military Mother’s Day Brunch at the Marriott Marquis sponsored by the hotel and the Association of the United States Army. At the brunch, I was inspired to learn that there are moms, who have lived here fewer months than I have, already jumping in to address issues like homelessness and mental health both in the military community and in the community at large.

As part of the programming for the brunch, Natasha Harth, 2016 Armed Forces Insurance Military Spouse of the Year, briefly spoke about the work that she has been involved in since moving to Marine Barracks Washington. This DC mom has been inspiring the residents of Marine Barracks Washington to walk with her through their DC neighborhood handing out bags of toiletries and other necessities to the homeless men and women of the nation’s capital; she calls her project, “Be a Blessing.”

I was also privileged to speak with two other women who have been honored by AFI’s Military Spouse of the Year Program in the past and now call the DC area home – at least for a little while. Dr. Ingrid Herrera-Yee, who has worked for over a decade to champion causes from providing services for special needs children to suicide prevention in the military community, is currently working to advocate for support on Capitol Hill for those seeking to serve as mental health professionals in the military community. Also, MJ Boice, part of the editorial team at Military Spouse magazine, is now working to connect military spouses from her new home in Northern Virginia near Marine Corps Base Quantico.

I’m so thankful for the Marriott Marquis-hosted event that allowed me, and roughly a hundred other military moms, to hear the stories of these extraordinary women. The Marriott Marquis knows how to do brunch; there were omelet stations, tables of fresh fruit, waffles waiting to be topped with strawberries and vanilla bean infused whipped cream, fresh orange juice and mimosas served to our table. My daughter kept busy with a card making station, a loaded cookie decorating station with dozens of topping and a coloring book brought to our table. What a way to enjoy Mother’s Day with my daughter!

Melissa Moore is Coast Guard wife and mom to two young children; her family has been living in the DC area for two years now as her husband is stationed at Coast Guard Headquarters. Melissa contributes to Trekaroo as their Washington DC, Maryland, and Virginia Guroo and can be found on Instagram as @DCTravelMom.