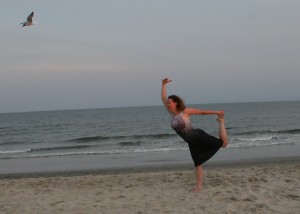 Last Fall, I went to see my midwife for my annual check-up. I left that appointment with two assignments: 1. Get my first mammogram and 2. Develop an exercise plan that I could reliably execute. After several months, the first assignment is behind me. The second? I’m still working. Apparently, my metabolism has slowed. And coupled with an exercise plan that is nonexistent, the direction things are going is not a good one.

I’m a 39-year-old mother of two children. After the birth of my first child (in 2005), I was back at my pre-birth weight – which was solidly on the “fit” side of the spectrum – within a few months. More, I was back at my pre-birth shape, which was astounding given how enormous I was as a pregnant person. After the birth of my second child (in 2007), however, my body did not take the same path. I may have been able to fit into my pre-pregnancy jeans within a few weeks, but my body’s shape just wasn’t the same. Last fall, my midwife laid it out for me. Since 2007, I have gained two pounds a year. And while these two pounds are not particularly troubling, the extra 20 I will carry in a few more years worry me. My midwife told me now was the time to reverse this trend.

I started out strong: running on the treadmill two or three nights a week (while watching chick-flicks – an excellent way to justify a dormant movie habit) and biking to work two to three times per week. But then a whole lot of excuses later, I found myself in spring knowing that I had most definitely not come up with an exercise plan I could reliably execute. I was back to doing nothing more than chasing my children around. The same nothing that raised my midwife’s eyes last fall.

So I started back at yoga, which I love. To celebrate the Spring Equinox, I joined a studio full of people and completed 108 sun salutations. And I have felt empowered since then. If you’re in Arlington or DC, I highly recommend a monthly pass at Tranquil Space, where the first month costs only $50! To celebrate the Summer Solstice, I tagged on another 108 consecutive sun salutations. I’m also back to biking to work at least twice a week, which I find to be a stellar way to start the day.

Here’s what my starts and stops at exercise over the past year have taught me. First, it’s easy to skip exercising. It seems so unimportant compared with the other demands on my time. I have to find a place for it to fit in my schedule. I found an 8:30 PM yoga class which is perfect for me. I can kiss the kids goodnight at 8 PM and easily be at the yoga studio in time for class, without feeling guilty that I’m missing out on time with my kids. Second, if it’s not fun for me, I won’t do it. I suspect this is true for a lot of people. I love yoga. I love the challenge. I love the quiet. I love the concentration. I love the time spent at yoga reflecting on my day and setting an intention for the future. It has made me a better mother. Third, having someone else motivating me can be a successful strategy. I work with a guy 20 years my senior who walks by my office on the way to his and regularly checks in with me about whether I’ve
biked. Frankly, it’s embarrassing to say no when I can see he sweated his way into the office.

In the end, I am beginning to grow confident that when I weigh-in this Fall, I’ll have at least maintained my weight, if not lost a pound or two. Twice, in the past month, my husband has noted a more muscular me than was previously present. I don’t own a scale, so I won’t know the verdict of my change until I see my midwife. But if you have any extra tips for me, I’ll take them! Because I really don’t want to continue this trend. I want to take back my body, now.

Elaine can be found on her yoga mat after her children go to sleep each night or chasing her kids over at Connor and Helen Grow Up!