My husband and I took our two small children to the Outer Banks last week for some relaxation and renewal. (Of course, that entire sentence is a contradiction in terms, but nevermind.) The condo we rented had no Internet connection, but I decided that was a reasonable exchange for proximity to the beach and access to a pool. Besides, it’s good to unplug now and then.

I was actually surprised by how little I missed my little rectangular companion, with its Mail of Hotness and Book of Faceness, not to mention instant answers to those questions that frequently arise, such as which is the hardest metal, and who is that guy in that episode of Law & Order. My husband, of course, brought his laptop along and we did make a couple of pilgrimages to Starbucks to indulge in a frothy coffee and make sure nothing on the world wide web had blown up in our absence.

We hadn’t bargained for the fact that our condo would have no cellphone reception, and no dial tone in the house phones either. If we wanted to make a call or send a text, we had to walk five minutes up the road to the town. But really, we hardly use our phones except to locate each other in Target or for the direst of emergencies – none of which arose – so it was all fine. We were mostly unplugged for a week, and we survived. We even bought a newspaper. Twice. (Three times if you count the local one we got to find out when and where Brave was showing. It was like olden times.)

Of course, we did have TV while we were away. In fact, we had cable, which is one step up from our digital antenna at home. The children had a wonderful time watching Disney and Nick Jr. and the Cartoon Network and shows they’d only ever seen, ironically enough, when visiting relations in Ireland, and were sorry to come home to the paltry two stations – PBS and Qubo – that we use our TV for.

And then the ante was upped, because our TV ceased to function. It is, to paraphrase Monty Python, an ex-TV. It is pining for the fjords. The audio is fine, but the screen has gone over to the dark side and cannot be recovered. It seems, from some Googling, that a repair would cost more than the TV did, and our warranty just expired.

So now what? Will the children go screen-free? What they gain in retained brain cells, they may lose through concussion, if they keep leaping from the sofa to the coffee table and back again the way they were doing today.  They might also risk the sanity of their mother: I usually use the TV as a stupefier, to calm and engage them when they’re off their little rockers with cabin fever or the witching-hour crazies. They sit down, they zone out, I can make dinner.

They learn all sorts of impressive wildlife facts from WildKratts on WETAKids. Why only the other day, Mabel dropped the term “proboscis monkey” nonchalantly into everyday conversation – in front of company, too. (I was so proud.) On the other hand, this morning she told me that if I got a Snap-on-Smile, I could attend weddings, interviews, and funerals. Her brother added that it was totally painless and involved no injections, just two visits to the dentist.

Hmmm. Maybe we’ll do without the goggle box for a little while and see how it goes. But if somebody ends up with a concussion, don’t blame me. 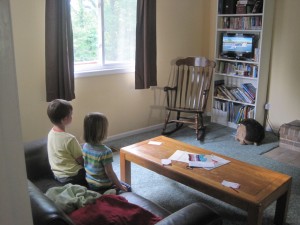 When not separating warring siblings and moving the coffee table further away from the sofa, Christine blogs as (not) Maud at Awfully Chipper. Photos are her own.