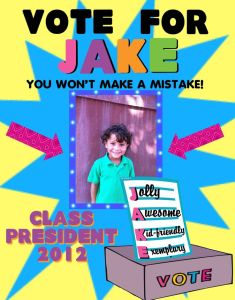 It’s election season at many area schools, and my own son has tossed his name in the ring to be Treasurer of his elementary school. Nobody seems to know what the treasurer actually does, but they sense it has something to do with money. At last count, there were around six students running for this office, and the fields for the other three offices were equally crowded. In the end, just like the Republicans on stage last night, most candidates will lose. But in doing so, they gain the opportunity to see what resilient people they are, which can be an important part of surviving life beyond the elementary school walls.

As parents, we often build nests for our children, intended to provide the greatest amount of happiness, security, and comfort. But intentionally or not, those nests can become cocoons, and rather than serving as launching pads to explore the world, they become worlds in themselves. Success breeds success, some would say. But those cocoons might be doing too good a job at keeping out failure.

A growing body of research suggests that it’s not success today that’s important to success tomorrow, but resiliency – the ability to adapt well to adversity, trauma, tragedy, threats or even significant sources of stress. This may be the quality we ought to be fostering in order to raise successful children, so I say – let them run in those elections, and let them fail.

But watching our children fail at getting elected is what most of us will do. And when they fail, we can point out the next day that indeed, the sun still rose. The playground is still a fun place to run around. The cafeteria still holds friends. And though we cheer the success of the child who ends up on top, we can know deep down that our own child’s failure may be coming at just the right time to help build a little bit more resilience – a trait that can be helpful in navigating life long after the school year ends.

Elaine occasionally updates her blog about running and parenting over at Connor and Helen Grow Up!