Hansel and Gretel come to Encore Stage and Studio

Hansel and Gretel come to Encore Stage and Studio

Hansel & Gretel at Encore Stage & Studio is a delightful and well-acted production. With tight pacing and a clear sense of momentum, the play felt polished and professional, even though the oldest performers on stage were only sophomores in high school, and most were middle schoolers or younger.

When a production is less even than this one, it’s easier to note what stood out as good. In this case, the show was strong all around! The acting was compelling; everyone commanded their roles with confidence. The interludes of sound effects worked well. This is no musical, but there were some chants and choreographed bits that kept the production feeling enchanting and other-worldly.

The sets were lovely and evocative, with a spare but glowing hearth at the siblings’ home, a spooky forest, and an appetizingly sweet witch’s cottage. 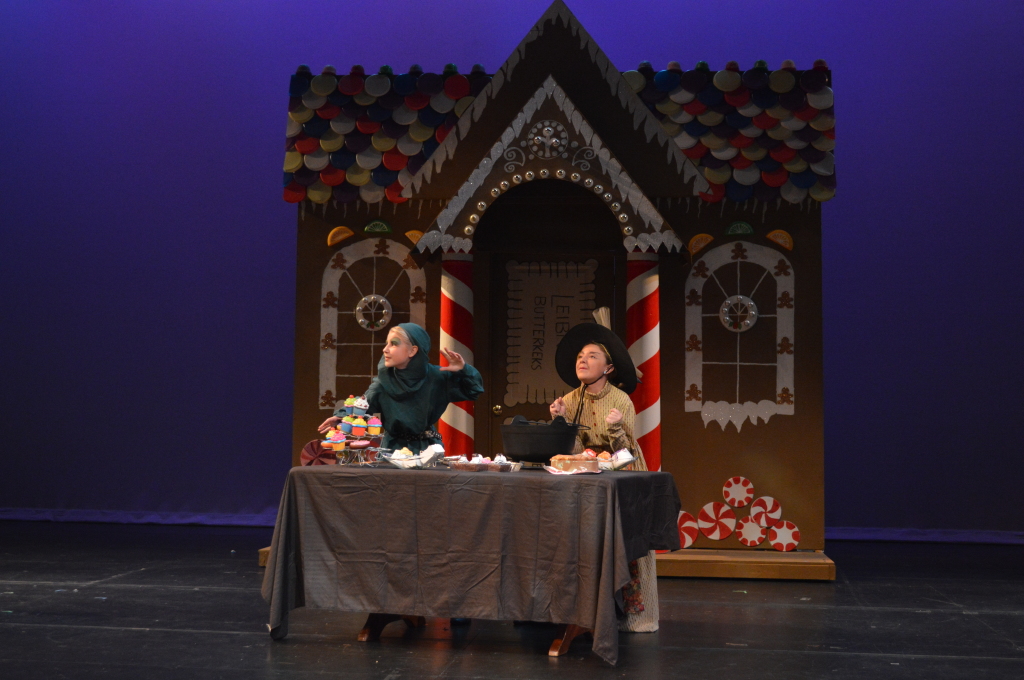 Most importantly, everyone on stage seemed to be having a great time. With children’s theatre especially, the actors’ comfort and confidence goes a long way. You try saying “The Gingerbread Witch will be pleased, be pleased!” several times in a row. It’s hard! But the hobgoblins made it sound easy, even fun! (So fun that my children have been reciting it for the past three days!) 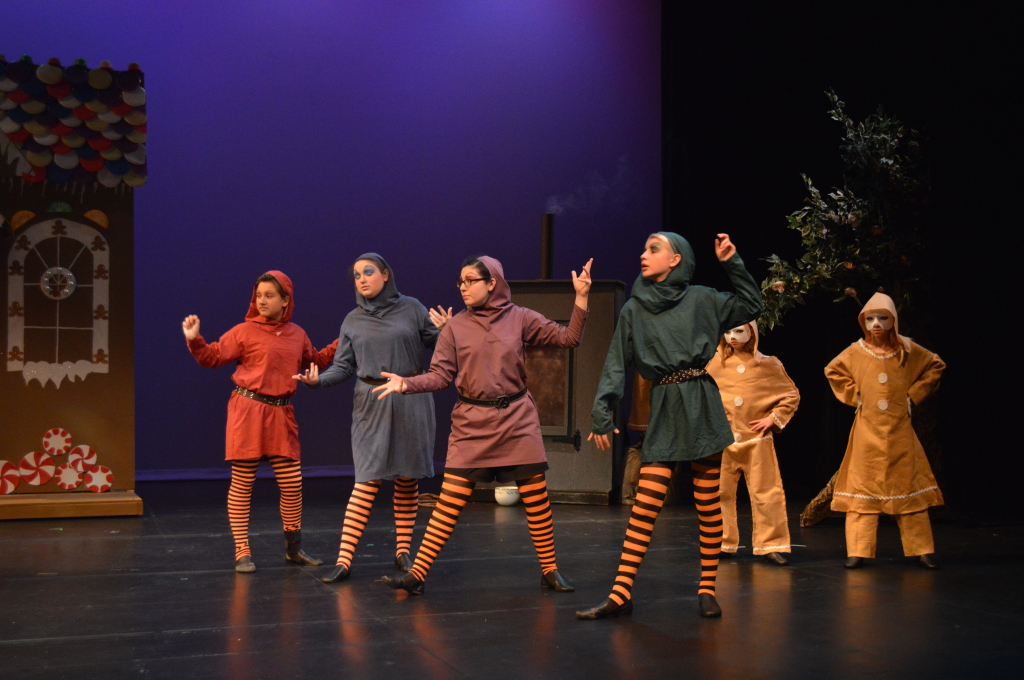 Both my children’s knowledge of fairy tales is admittedly paltry, and my five-year-old wasn’t at all familiar with the story of Hansel and Gretel before we got to the show. I meant to fill her in, but it just didn’t happen. It would probably be wise to make sure young viewers knew the story so they wouldn’t be too scared. The play is recommended for ages 6 and up, which is appropriate due to some spookiness of scenes and, of course – spoiler alert! – the fact that it deals with real death. (Also: parents who kick out their children for not working hard enough. And children who, as a result, have to sleep on the forest floor.) 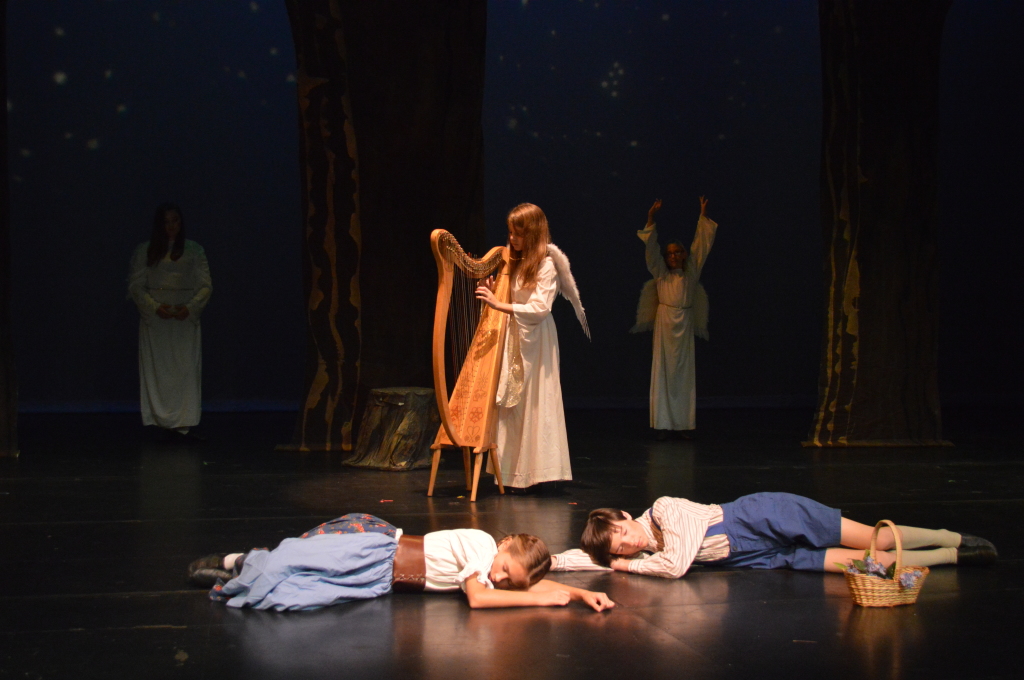 There were some moments when my daughter curled up in her seat, not wanting to look at what would unfold on stage. Something helped us get through the second act: during intermission, welooked in the lobby at the poster boards with multiple photos of the cast. These were on display for the cast members’ parents to order copies of their little actors, but for us, the boards provided a reassuring peek of what was to come. Knowing my daughter was going to ask “What’s going to happen?” again and again as the second act unfolded, I chose instead to arm her with information to stave off what I thought might be disruptive cries.

Pointing at the photos, I said: “Oh, there’s the witch’s home, decorated with candy. I guess they must find her cottage. Here it looks like Hansel is going to get stuck in a cage for a little while. But over here he seems to have gotten out. And look, there’s his mom and dad! They found him! Everyone is there at the end. So I guess it’s all going to be okay!” 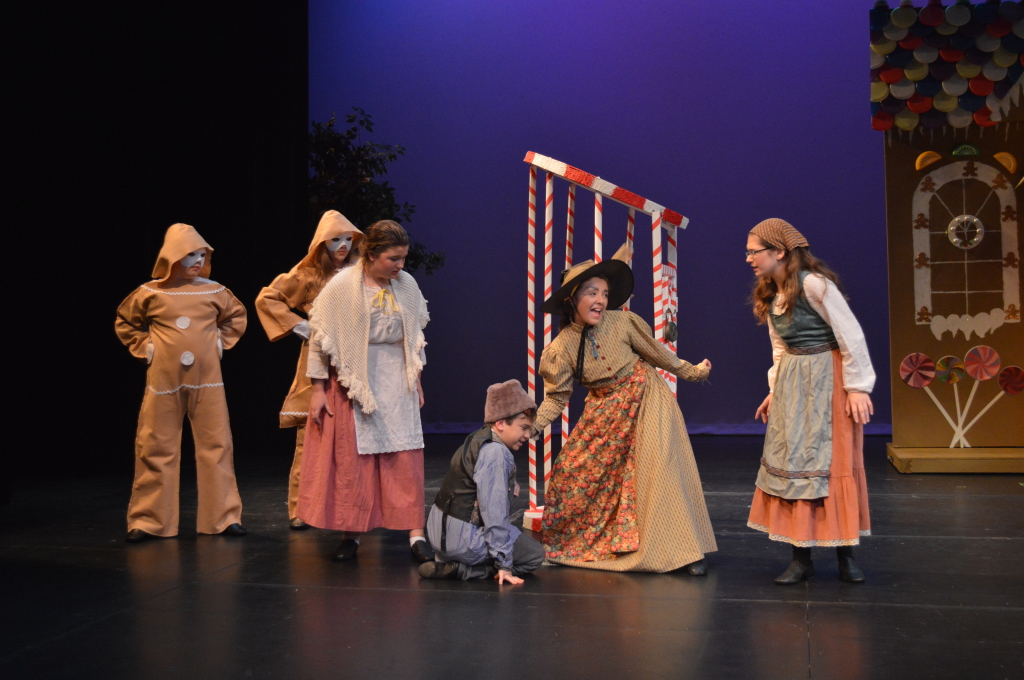 For my daughter’s young age and her ignorance of the story (bad mommy!), she needed help remembering it was all pretend. It also helped to be in the lobby where, at other shows, she had met the cast. She was looking forward to having her program signed after the performance. At previous shows, my kids have gotten one or two actors to sign, but this time they kept going back for more and fought in the car about who had more signatures! It’s nice to be able to walk up to the person playing the villain and be able to tell her you enjoyed her performance! 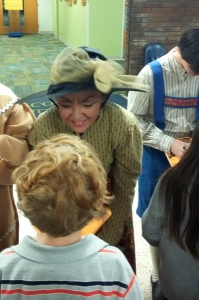 All the actors were great, and it was a true ensemble effort that worked on all levels. But it would feel dishonest not to admit that little Miranda Tonsetic was a stand-out for me. The Alexandria fourth-grader had a great sense of comedy. She played the baby troll in perfect harmony with her also-strong parents, but she owned the stage when it was given to her. It’s always fun to see children pop up in different shows in different roles, and I will certainly be looking for her! 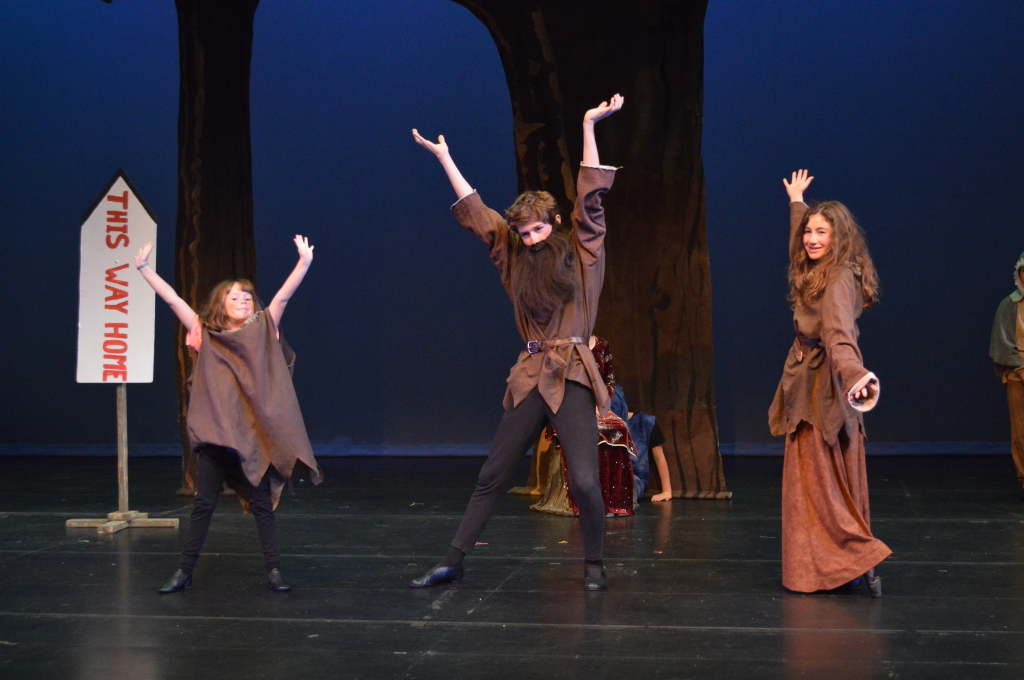 About eight times a year, Encore gives children the opportunity to act and to work on stage crew. The shows usually run two weekends, with four performances. Auditions are open to all, and the parents I’ve talked to have said the rehearsal schedules are quite manageable. We’ve enjoyed attending several of these plays, and my son, who has done some Encore camps, might take the upcoming December 5 audition workshop and try his hand at auditioning for the first time.

After the show, my children both enjoyed the window display with a gingerbread house and photos of past productions of Hansel & Gretel at Encore dating back to 1973! When something has been around as long as your mom has, that’s impressive!

Disclosure: I received two free tickets in exchange for writing a review of this play. All opinions are my own. 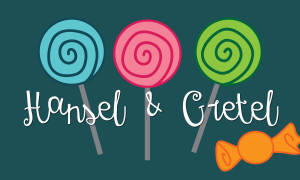 Hansel and Gretel runs through November 15. Tickets for this show and other upcoming shows can be purchased at http://www.encorestageva.org/tickets/now-playing/