Patti LuPone at the Strathmore: A Sentimental Date Night

Patti LuPone at the Strathmore: A Sentimental Date Night 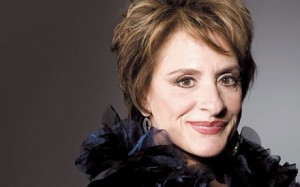 Last weekend, my husband and I secured a babysitter and had originally planned to attend a good friend’s party, but ended up going to see Patti LuPone at the Strathmore. I felt guilty at first, knowing my friend throws one helluva get-together, but we’ll be invited to her annual party again, and who knows how many chances I have to see Patti LuPone in concert — particularly at our  favorite local arts venue.

Patti was performing a concert of love songs called “Matters of the Heart.” As she jokingly explained, her songs explored the “various aspects of love”: innocence of first love… to lust to the love between parents and children … to lust to heartbreak… to lust. Yes, she’s a funny performer who is as good with the storytelling bits as the songs themselves — which is saying a lot, because she’s an amazing singer.

Patti LuPone is special to me, because as a little girl, my mother and older sister introduced me to her via “Evita.” My older sister Diana (who’s 12 years my senior) was lucky enough to get treated to annual Broadway trips by our child-free Aunt Ele, who always took her to see whatever the hot new show was on the Great White Way. My sister was able to see the original productions of some of the biggest shows in the ’70s, including “Evita” — starring LuPone as the titular Eva Perón and Mandy Patinkin as Che. The “Evita” album was played a lot in my house when I was growing up, so naturally I’m a lifelong LuPone fan and have seen her in three different Broadway shows — “Gypsy,” “Sweeney Todd,” and “Anything Goes.”

Last Saturday night was my fourth time seeing her life, and she was just spectacular. She belted out everything from a mix of showtunes (“Easy to Be Hard” from “Hair”; “I’m In Love with a Wonderful Guy” from “South Pacific”; “Not A Day Goes By,” from “Merrily We Roll Along’; and the show-stopping “Being Alive” from “Company”) to pop ballads like Cyndi Lauper’s “Time After Time,” the Hollies’ “Air That I Breathe” (which includes one of the sultriest lyrics of the night: “Making love to you leaves me peaceful, warm and tired/What more could I ask/There’s nothing left to be desired”); Gilbert O’Sullivan’s “Alone Again (Naturally)” and Dan Fogelberg’s “Sam Old Lang Syne.”

Obviously a lot of the songs that she sang are before my time, but she interpreted them in such a beautiful way, I didn’t care that they’re usually tunes you’d hear on an “oldies” station. Patti sings everything with such intensity that every single song — funny, heartbreaking, lovely — was sung with her signature passion.

“Matters of the Heart” is available on CD (minus the Broadway songs), and I have to admit, that even though she didn’t sing “Don’t Cry For Me Argentina” or “I Dreamed a Dream” (which I’m sure gets old for her!), my husband and I had a romantic evening.


When she isn’t humming showtunes, Sandie blogs about Young Adult literature at Teen Lit Rocks and occasionally about herself at Urban Mama. She also reviews movies and books at Common Sense Media.