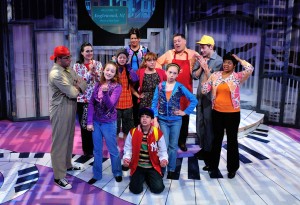 Cast of Big The Musical, Photo by Bruce Douglas

Looking for a fun, entertaining family activity this weekend? Catch Big, The Musical at Adventure Theatre MTC. In your younger years, you probably saw the 1987 hit movie Big staring Tom Hanks.  Now you can take your kids to the live stage version and introduce Big to another generation.

For those not familiar with the movie, a young Josh Baskin wishes that to be older and wakes up in the body of a 30 year old man. Though he looks like a grown-up, he still thinks and reacts like a teenager. Josh tries to adapt to life as an adult, but learns that being “big” is harder that it looks. 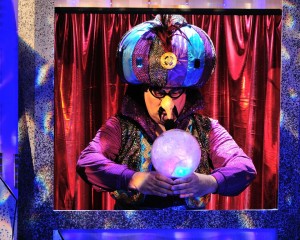 This stage production of Big retains the famous elements from the movie version: Zoltar and the floor piano. Since it’s a musical production, there’s plenty of catchy songs and dance numbers. My daughter was mesmerized by all the dance numbers.

Watching the young teen actors in Big, The Musical  was quite a treat. These young actors held their own next to the older, more experience cast members.  I especially enjoyed Brendon Debonis as Billy, Josh’s best friend. I’ve been to many products at Adventure Theatre MTC and was thrilled to see Calvin McCullough perform as well.

Big, The Musical runs through October 28.  All tickets are general admission and are $19 per person.  Buy tickets online or call the box office at 301-634-2270.  This show is recommended for ages 5 and older. Adventure Theatre is located in Glen Echo, MD on Glen Echo Park.

I received tickets in order to review the show. All opinions are my own.

Thien-Kim chronicles her love-hate relationship with squash on My Cup of Creativi-Tea, wishing she got paid to nanny her own children at I’m Not the Nanny and sneaking time to read books at From Left to Write.