Parenting Decisions: Judge Me Not

Parenting Decisions: Judge Me Not 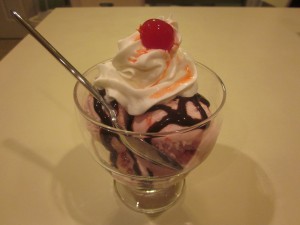 This morning at breakfast, I read an article to my kids about a dessert that was way over our price range for sweets, even for a birthday.

This chocolate sundae at Georgetown’s Serendipity3   costs $1000 and is appropriately called “Golden Opulence.”

My children are young, and to them, ice cream is ice cream, cake is cake, pizza is pizza.  They cannot tell the difference between Cold Stone ice cream and Baskin Robbins; I would be surprised if they could differentiate Domino’s Pizza from Little Caesars.

But when I explained that the “Golden Opulence” cost a thousand dollars, their eyes widened.

They wanted to hear more.  I read that this sundae was “‘Tahitian vanilla bean ice cream infused with Madagascar vanilla that is covered in 23-karat edible gold leaf, drizzled in ‘the most expensive chocolate in the world’ (Amedei Porcelana), with chunks of Chuao chocolate, topped with caviar and infused with fresh orange, passion fruit and Armagnac. Instead of jimmies you get truffles, gold-dipped French dragees (that’s Jordan almonds to you and me) and marzipan fruits. ”  I explained that it was “‘Baccarat Harcourt Crystal goblet, which you get to keep, just like one of those little plastic batting helmets at the ballpark’.”

But they didn’t really get it.

I even explained that the sundae is so special that it’s served in a fancy-schmancy sundae dish along with an 18K gold spoon and a petite mother of pearl spoon.  I showed them the gilded sugar flower on top, and they squinted their eyes to try to see the thousand dollar sundae in the black and white of the newspaper, but I could tell they couldn’t.

“It was actually bought this past weekend for a little boy’s birthday,” I said.  “He turned 12.”

“I’m not sure, I really don’t know,” I said, as I skimmed the article again.  (Did I miss something? What was the reason for this insane indulgence?)  “Oh, it says ‘His mother had celebrated her 12th at the restaurant’s flagship location in New York City,'” I explained.  “So I guess his mom bough him the Golden Opulence because she had the same thing when she was twelve.”

“That’s crazy.”  “Wow, he’s lucky.” “Really? That seems pretty nuts—so expensive,” the kids all muttered as they shoved the last few bites of cereal in their mouths.

Perhaps it’s the approaching holidays, or maybe it’s high-holiday credit card anxiety.  I don’t know.  What I do know is that it isn’t my place to judge how some woman I don’t even know spends her 12-year-old’s birthday.  Why do I care, and why should I care? Yes, it does seem a bit expensive for a birthday treat, but it’s her money and her son and her decision. And that’s that.

I’m sure that some have questioned my decision to buy my youngest flashy purple boots with fur at the top or my oldest a pair of studded grey boots from Justice.  Some wonder why we waited to send my son to Kindergarten.  I’m betting that some may view me as a helicopter parent and others may believe I’m too hands-off ; some may think I’m doing a decent job parenting while others view my parenting decisions as selfish, thoughtless, or silly.

But I truly believe that I’m doing the very best job I can at the hardest job I’ve ever had. And as long as I can say that, who can ill judge me? I’m going to go out on a limb and say that this mother—the one who bought the $1000 Golden Opulence for her son’s big day—is in the same boat as we all are.  She’s doing the best she can with what she has.

And if she just so happens to have an extra grand sitting around for an ice cream sundae, I’ll raise my pint glass (from Crate and Barrel) to her Baccarat Harcourt Crystal goblet and give her a cheers (ever so gently) to her good fortune.   (And as soon as the glasses were back on the table, I’d ask her politely for a taste of the Golden Opulence.)

Thank you to John Kelly’s A dessert this rich just doesn’t sit well in today’s Washington Post for inspiration, conversation, and blog fodder.

Amy is a huge ice-cream fan, which is why she has thought so much about a mother who bought her son this kind of incredibly expensive sundae (she’s jealous).  When she’s not thinking about sweets, Amy writes about parenting, kids, and education, at teach mama, and she is the owner and creator of we teach, a forum for parents and teachers to share ideas, learn from each other, and grow.

About the Author: amy mascott