Reflections on Delaying Kindergarten For a Year

Reflections on Delaying Kindergarten For a Year 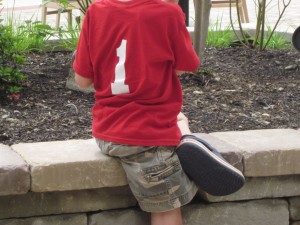 Our son turned five last August, and he was slated to start Kindergarten here in Montgomery County three weeks after his fifth birthday.

But we decided to wait a year to send him to Kindergarten.

He didn’t go.  We redshirted him, and we couldn’t be happier.

Neighborhood kids who hit the big numero-cinco last summer walked up the street and to the school on August 30, brand new backpacks filled with super-cool supplies, packed lunches, and bellies full of butterflies.

But my son did not join them.

Kids all over the county just days or weeks older than my son—some even younger than he—sat through five hours of lessons, five days a week, for nine months of this year, but not my son.

Instead, my son scooted to and from the elementary school each day to drop off and pick up his first-grade sister, and he went to three days of pre-K—one half day and two full days where he stayed for ‘lunch bunch’ with his buddies.

Instead of going to Kindergarten, my son, my youngest daughter, and I hit parks, hit libraries, hit nature centers, and hung out during the times they weren’t in preschool.  We read books, did puzzles, went grocery shopping, had playdates.  We took the Metro into the city, we went to the zoo, we took our dog to the dog park.  I watched as mathematics and numbers opened up to my son, as his curiosity about the world around him grew and he became a reader.

Instead of beginning his public school career at the ripe old age of five, my son played a little longer.  His Matchbox cars, dinosaurs, and Legos saw a lot of action, ran a lot of races, fought a ton of battles.  He kicked around at indoor soccer. He helped me try new recipes.  We played games.  He played with his sister. Some days they were best friends; other days they fought like strange bulldogs.

Sure, waiting a year to start public school meant that we ended up paying a pretty penny for another year of pre-K, but we did it, and we are glad.  Though it was a decision that we labored over, talked about for months, and really questioned long after plans were firm, it is a decision we felt was necessary and right for our son.

Both my husband and I are professional educators; he is an administrator who taught both elementary and high school, and I am a Reading Specialist and former high school English teacher.  We understand the game, but it doesn’t make a decision like this any easier. It does, however, give us a little more insight as to the demands of school today and what our son will be faced with down the road—not only in Kindergarten but in grade three, six, nine, twelve.

Just because I could quite often discern my ‘young’ ninth grade boys from the others because they were a few steps behind socially doesn’t mean it’s the case for every younger student. There’s no scientific proof or compelling data that will demonstrate to us that the decision to redshirt our son was correct.  Maybe there will be down the road, but there’s nothing now. We looked. We researched. We had to go with what we felt would be right.

We might say we understand the public school game in our area because we have experience in this arena; we are, however new at this parenting gig for which there’s no manual, no degree, and no certification.  All we know for sure, as we walk this journey is that everyone we leaned on for advice—every seasoned parent who had to make this same decision—suggested we wait. They advised us to wait a year on kindergarten because they did the same for their close-to-the-cutoff birthday child, and they felt it was the best decision they could have made—for their child, for them as parents, for their whole family.

I will be sad beyond belief come August when my son, newly six and sporting his own brand new backpack, super-cool supplies, packed lunch, and belly full of butterflies, joins the neighborhood kids on their walk to school.  I will miss him terribly for the long day he’s in that building just steps away from our home. But he will enter that school more ready for Kindergarten than he was last summer.  He will be a more eager learner, a more patient friend, and a more capable student.  And it is our simple wish that our decision to wait on Kindergarten will set him up for a more successful—worthwhile, meaningful, pleasant, and fun–thirteen years and then some.

Amy writes about kids, education, and their happy intersection over at teach mama, and she is the owner and creator of we teach, a forum for parents and teachers to share ideas, learn from each other, and grow.  Head on over and join in on the fun!

About the Author: amy mascott