Did You Respect the Bird This Year?

Did You Respect the Bird This Year? 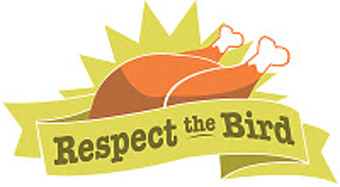 My 5-year-old daughter, infused with knowledge (and endless questions) about the journey of the Mayflower, the Pilgrims, Squanto and the Big Thanksgiving Feast from her kindergarten class has deluged me with a seemingly endless supply of drawings of turkeys.  And absolute outrage every time she sees any sign of Christmas on street corners or stores.

“What?  Why do they have Christmas decorations up? Don’t they know it is THANKSGIVING?” she exclaims.

How does a parent explain holiday scope creep to a child who is just now fully appreciating the celebrations that comes between the “major” holidays of Christmas and one’s own birthday?

When the press release for AllRecipes.com’s “Respect the Bird” campaign hit my Inbox, inwardly I said a big “hurrah!”  I even started to write a post on my own blog.  I agree with the concept — that we should all just slow down and enjoy the holiday of Thanksgiving.  Forget the pre-Thanksgiving sales.  Ignore the hype until AFTER Thanksgiving. The problem is, in practicality, like everyone, I’m having to take advantage of the bargains to stretch that Christmas dollar.  We’re traveling on Black Friday, so yes, in all liklihood, I’ll be one of those crazy people hitting a big box store on Thanksgiving night.

However, I do think this year the Christmas hype has gone to extreme levels.  It seems the pre-Black-Friday sales have been more prevalent than years past as I recall seeing Christmas trees up in the “mart” stores before Halloween. According to the “Respect the Bird” press release, “A national survey from Allrecipes found 82 percent of home cooks think Christmas is marketed too early and that the Thanksgiving holiday gets too little attention as a result. Moreover, 42 percent admit being frustrated by Christmas shopping sales that begin before Thanksgiving while 39 percent just try to ignore them.”

Gauging by my daughter’s reaction, I worry about what values we, as a society, are starting to teach our children when the focus shifts from the meaning of the holidays themselves to the type of sales they bring.  In recent weeks we’ve seen blow-out Columbus Day sales, Veterans Day sales, “Pre-Black Friday,” then we’ll have Thanksgiving Day sales, Black Friday, Small Business Saturday and Cyber Monday.

I want my children’s memories of Thanksgiving to be about sitting around the table with family and friends, not about what great bargains Mommy and Daddy got.  How about you?

When she’s not about to be trampled at a sale or cooking turkey, J.J. Newby blogs as JavaMom at Caffeine and a Prayer and tweets as @caffandaprayer. Photo credit:  AllRecipes.com and the Respect the Bird campaign.