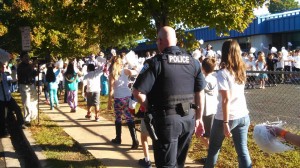 This photo is from the Arlington County Police Department Facebook page. It’s what I understand to be the “standard uniform”.

Last week, my children were waiting for dinner and talking about their day. My first grader, who started public school this year, looked at my fourth grader – eyes agog – and queried “was there a police officer at your lunch today – with a GUN”? “Yes”, my fourth-grader confirmed. “He was walking around the lunchroom and everyone could see his GUN!” My first grader, not one to let the opportunity to jump to conclusions get away from her, posited that there “must be a very bad person trying to get into the cafeteria”.

And so it was decided, at my dinner table, that lunchrooms are not safe places. Otherwise, why would that police officer need to wear his gun?

So I went to the PTA meeting that night, and when the principal announced that Arlington had won some sort of grant that allowed the police department to place officers in schools (something that hadn’t been done on such a regular basis for about 10 years), I asked whether there was any thought given to having the police not open carry. Rightfully, the principal noted that it’s not her job to tell the police what to do. The next day, I emailed the non-emergency police contact address (police@arlingtonva.us).  My question was whether or not officers could be asked to conceal their weapons. I received a phone call back the next day – from the officer posted at my children’s school.

Here’s what I learned.

This, of course, struck me as high on the nonsense factor. My responses?

To be fair, it was totally inappropriate for the police department to have the officer call me back. This is a policy question, not a question for a frontline officer. I hope at some point, Arlington County can evaluate existing data about whether our elementary school students are, in fact, safer with an officer openly carrying a gun, or whether the same goals could be accomplished in a uniform that’s a little less aggressive.

I get the feeling I’m alone in feeling this way. Anyone else have children nervous about police officers who are openly carrying guns? Anyone else have an officer greeting their children in the lunchroom with a gun strapped to his/her belt?

When not being called by the police, Elaine likes to write about her children at Connor and Helen Grow Up.