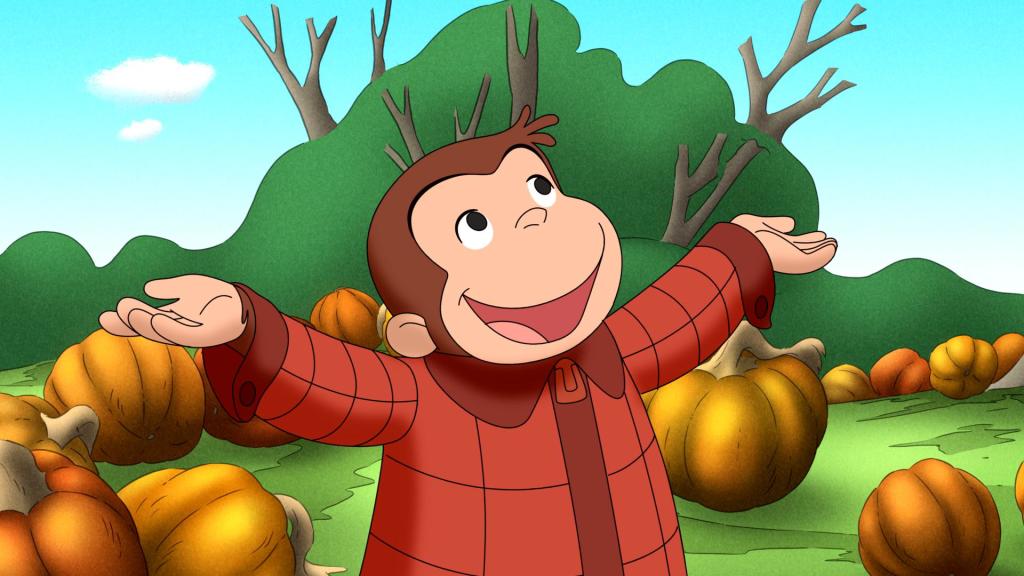 It’s George’s first Halloween in the country, and Bill tells him and Allie about the “Legend of No Noggin” – a spooky tale about a hat-kicking scarecrow who haunts the countryside on Halloween. But is the legend real? George and Allie are determined to find out by taking a picture of No Noggin in hat-kicking action. But first, George needs to figure out what he’s going to be for Halloween so he can win the costume contest at the town Boo Festival and give the prize to the Man with the Yellow Hat. Will George be able to put together the perfect costume and find out the truth about No Noggin? Only the curious will find out!

My older kids are a little beyond “Curious George” now, but my youngest is six and still gets a kick out of preschool-themed shows whenever his siblings aren’t hogging the remote control. So everyone now and then, when it’s just him and me, we watch “Curious George,” “Sesame Street,” and other PBS Kids shows that his 7th-grade brother and 4th-grade sister no longer care to watch. I’m admittedly happy to indulge my son’s interest in these shows, because let’s face it, before long he too will be more interested in “older” programming.

“Curious George” returns for its ninth season on the air this Monday with a special episode about Halloween (see the description above). The “Halloween Boo Fest” episode kicks off a new season that is sure to engage younger viewers and occasionally older siblings who want to cuddle and watch one of the sweetest shows on TV.

PBS Kids has plenty of Halloween-themed entertainment for your viewers next week, with Halloween episodes on “Dinosaur Train,” “Daniel Tiger’s Neighborhood,” “Wild Kratts,” “Arthur,” and more. Check your local listings for airtimes.

As for the rest of the season, here’s what our favorite little monkey has in store next week:

“Submonkey”- When Professor Pizza’s birthday present is dragged away by a strong ocean current, George volunteers to take an undersea adventure in a monkey-sized submarine to retrieve it. Can the curious little monkey locate a small package at the bottom of the ocean or will Pizza’s present be forever lost at sea?

“Double-Oh-Monkey Tracks Trouble” – Double-Oh-Monkey takes on his most important case yet – to prevent Steve’s well-intentioned (but always disastrous) “good luck present” from ruining Betsy’s dance recital! Using his super spy skills and all five of his senses, George tracks down Steve and discovers…a bucket of wet paint?! Can George warn Betsy in time? Or will her dance recital get a splash of color?

“Monkey Goes Batty” – A hole in the roof means George and the Man with the Yellow Hat must sleep in the living room while their bedrooms are being repaired. But their adventure quickly turns into a disaster when George’s nightly trips to the kitchen keep the Man with the Yellow Hat awake at night. Can George figure out a way to quietly find his way to the refrigerator in the dark?

“Curious George and the Balloon Hound” – George and Hundley are amazed by all the flying machines at the museum’s aviation exhibit. So when Hundley’s souvenir airship flies out of reach in the lobby, he dreams he is British flying ace, Leftenant Doxie. Joined by the daring flyboy Chuck Monkey, the dynamic duo uses propeller power as they race towards the finish line. When Hundley awakens from his dream, he has a few new ideas on how to get his ceiling-bound toy within reach.

“George’s Photo Finish” – Today is the big unveiling of the Ankylosaurus dinosaur skeleton at the museum, but it’s missing a leg! George and the Man with the Yellow Hat thought they delivered all four bones. Where did the fourth bone go? Fortunately, Mr. Quint took pictures on their way to the museum. Maybe the photos can lead them to the bone…if they can only figure out which order to put them in.

“Monkey Mystery Gift” – George and Allie’s imaginations run wild as they brainstorm what could be in the large unmarked box on George’s doorstep. Based on its weight, sound, smell and bristly hair, they’re certain it’s a baby goat! But what’s really inside surprises them more than anything they could ever have imagined.

Sandie is a PBS Kids VIP (Very Important Parent) an uncompensated ambassador program she’s a part of because she loves PBS.