Today we feature a guest post by Kim O’Connell, a mom of two and a freelance writer who focuses on historic preservation and sustainable building. 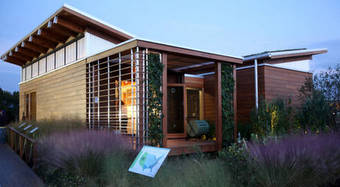 The weather seemed to be playing a cruel joke on the final day of the Solar Decathlon, the biennial architecture competition that concluded earlier this month on the National Mall. Dark clouds, biting wind, intermittent rain—it was hardly the kind of day to celebrate harnessing power from the sun. Yet I was impressed by the throngs of people who braved the weather to check out this year’s solar houses. Clearly there is a desire for more choices when it comes to housing—particularly more renewable energy, more innovation, and less waste.

Founded and organized by the U.S. Department of Energy, the Solar Decathlon brings together collegiate teams from across the country and around the world to design, build, and operate net-zero solar houses. Over the course of 10 days, decathletes compete in 10 categories, including architecture, affordability, market appeal, engineering, and even home entertainment.  (Even though the 2011 Decathlon is over, a wealth of terrific photos, videos, and other materials can be found on the Decathlon website.)

As a journalist who writes often about sustainable design, I was there to cover the Decathlon for AIArchitect, a publication of the  American Institute of Architects, and I appreciated the remarkable design diversity on display. I remember the first Solar Decathlon nearly ten years ago. That year, the houses resembled little more than a techno-trailer park—basically glorified sheds with solar panels attached. This year, by contrast, the emphasis on design was far greater. Houses ranged from a futuristic entry encased in a fabric mesh “outsulation” to a Y-shaped house made from recycled shipping containers.

Most impressive to me, however, were the numerous houses  built with real-world market appeal and liveability in mind. The overall winner of the Decathlon, the University of Maryland’s WaterShed house, was a perfect case in point. In addition to harnessing solar energy, the house was organized around the conservation and reuse of water—for irrigation, a kitchen garden and other on-site uses—all in a lovely, elegant space that still felt homey. (I’m not just saying that because I’m a UMD alumna—but go Terps!)

I also liked Appalachian State University’s entry, the Solar Homestead, which won the Decathlon’s People’s Choice Award. The house felt spacious and urbane, even as it used reclaimed native tree bark on its exterior siding, which was an uexpectedly rustic touch.

More than appearances, however, these houses just worked well. Even with all the rain, seven houses still managed to produce a solar energy surplus—a remarkable feat. For the first time this year, the Decathlon also required that entrants meet an affordability standard, proving that solar living is not only for the eco-conscious elite.

Now that the competition is over, several Decathlon houses will be sold or turned over to real families to live in. Others will be retained on campuses or public places for education and further research. Either way, it’s all to the good. The more solar technology can be brought to bear in the real world, the better off we’ll all be. 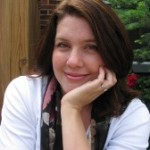 Kim O’Connell’s writing has appeared in National Parks, Preservation, Eco-Home, Babble, and The Washington Post, among other publications. Her professional website can be found at greenquill.com and she blogs at bloomingboy.com.