Disney on Ice “Dare to Dream”: A Review

Disney on Ice “Dare to Dream”: A Review 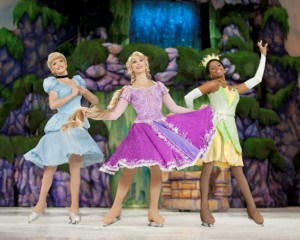 On Wednesday night, my mom and I loaded the girls up in the car for the long trek to the Patriot Center. You know it’s a really good reason if I am going to pack up on a rainy Wednesday night to trek from Silver Spring to Fairfax during rush hour. And it was – we were headed to the opening night of Disney on Ice “Dare to Dream.”  Unfortunately for my girls, I wasn’t clever enough to write down the start-time of the show correctly. The first clue should have been when they lifted the cones blocking access to the prime parking spots directly across the street from the Patriot Center…affording us the chance to secure a spot with ease on a rainy night. Our second clue should have been the non-existent line at Will Call.

But it wasn’t until we sat down for the Cinderella portion of the show and suddenly they were wrapping up for intermission 20 minutes later that we realized the show didn’t start at 7:30. It actually started at 7pm.

First lesson: Don’t trust me and double-check the show start-time.

Second lesson: If parking for anything related to Disney is easy and works out with no drama, there’s a reason.

Third lesson: When missing part of a Disney Princess show, just don’t tell your kids that they missed the first act. And don’t feel guilty about it.

Though the truth is, we missed what was surely a fabulous ensemble telling the story of the Princess and the Frog, complete with amazing music. I am super disappointed about that. But I still am not ever revealing it to my girls. And if you tell them, I’ll call you a liar…

So, my review is only for the final two acts and then the finale…because I am an idiot.

Cinderella is a resident favorite for my oldest, so she was delighted to walk into the Arena to find the Mice on stage helping Cinderella. I was mystified as to how anyone can ice skate, let alone so well, wearing an enormous mouse costume. The Fairy Godmother never disappoints and she very theatrically transformed the pumpkin into a glowing carriage ride fit only for a true princess. My mom marveled over Cinderella’s shiny, sparkly ice skates and confessed her life-long desire to ice skate in just one of these shows.

We were enjoying it more than our girls?

No. They were transfixed, including my completely exhausted because she refused to nap because she was so excited – almost 3-year-old. But our sheer pleasure in watching the stories of the Princesses unfold was pretty close to my girls. I ain’t gonna lie.

After intermission, which was notably quick and we avoided all the over-priced Disney swag hanging around the Patriot Center by setting the ground rules before we even left for the show: NO ONE IS GETTING ANYTHING….YOUR TREAT IS GOING TO THE SHOW. Which I then repeated mercilessly until I could feel them rolling their eyes at me. On this one, I stand firm that they learn that going to a live show is the treat, not the over-priced Disney merchandise being hawked just beyond our seats.

The second half of the show started off with the newest Princess, Rapunzel from Tangled. I was really anxious to see how they would handle her long, silken hair while spinning around ice, and it was shown very creatively with wheat colored sashes that moved from the ceiling down towards the ice. At one point, Rapunzel and Flynn Rider were hoisted up on Rapunzel’s wheat sashes, like a hybrid ice-skating/Cirque de Soleil move, spinning around in the air. We LOVED it. Even my mom, who wasn’t familiar with the new Tangled story line, was delighted and surprised with the scene. My hands-down favorite act was the bar scene when the shady Viking characters sing the “I have a dream” song. The costumes, dancing and music were exciting, hilarious and dynamic.  Next up in my line of favorites was the Tangled horse, Maximus, whose costume is strikingly similar to the way he looks in the movie, and I was consumed with how many people were in that costume and how they coordinated ice skating, let alone dancing. Meanwhile my girls were just enraptured.

As my youngest was starting to drift off, suddenly Mickey Mouse and Minnie appeared on the Ice and every princess dramatically arrived along with her prince for the grand finale. Of course, my youngest was then wondering where Goofy was, probably because she couldn’t possibly think of anyone else who was missing, but the dramatic fireworks to signal the ending made her quickly forget the absence of Goofy.

The show was just under 2 hours, with the brief intermission, and kept my over-tired and exhausted children enthralled and immobilized in their seats for the entire time. I would definitely recommend seeing it at the Patriot Center this weekend or in Baltimore next weekend.

Disclosure: Feld Entertainment gifted the tickets to me but my opinions here are my own. When Monica isn’t busy messing up event times and generally being confused, she blogs at Wired Momma. Follow her on Twitter @wired_momma