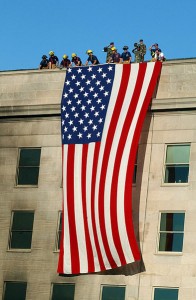 Tuesday, September 11, 2001.  School had started the previous Tuesday, the day after Labor Day, the traditional first day of school in the district where I was an eighth grade science teacher.

This was my first school year as a Mrs.  I’d gotten married at the beginning of summer and was still blissfully happy as a newlywed.  The Husband and I had bought a house in July, were settling in and enjoying life together.  We often wrote emails back and forth to each other during the school day just to keep in touch.  On September 11, The Husband had woken up sick and called in to work.  Before he went back to sleep for the day, he drove me to my school and dropped me off with a kiss.

The start of school had been non-eventful.  Each day, I had the first 90 minute block off for planning and meetings.  All the science teachers at my school had this same common planning period.  On 9/11/2001, I happened to glance at my colleague’s television.  It was turned on, but the sound was muted.  I was amazed to see an image of one of the World Trade Centers, smoke rising off the top of it.  I ran to my own classroom to turn on the television and sat down to watch.

I confess a bit of optimism at the time.  I figured the one tower would be evacuated with no problems, perhaps airlifting some people out of the upper levels of the tower.

My computer was beeping like mad, indicating new email.  I quickly sat down to check it, and discovered several messages from The Husband.  He had turned on CNN upon getting home and had been frantically emailing me with news, asking me to call if possible.  I phoned him immediately, and we spoke briefly.

My colleagues and I sat glued to the television in my classroom.  The guidance counselors and principals were prowling the building, checking on teachers who knew the news, and quietly informing others who were in classes.

As we watched, we saw the second plane crash into the South Tower.  I knew my hopeful thoughts of evacuating the first building were in vain and that this was something very serious.  At ten minutes to 10:00, an hour after I started watching the news, speculation began to swirl about something being hit in DC.  Reports of thick black smoke were being reported on the radio, which I also had on in my room.

Then it was 10:00.  My planning period was over, my first class of students was arriving.  My students knew something was up;  the tension was palpable.  One of my kids asked me if we were being attacked.  I could only answer honestly: “I don’t know.”

With great effort, I proceeded with a normal class routine.  That may have been the most difficult thing I’ve ever done in my teaching career.

Somehow, I made it to lunch time.  At that point, the teachers all updated each other and checked the internet for news.  By this time, the crash in Pennsylvania had occurred, the Twin Towers had collapsed, and DC was being evacuated.  I called The Husband again, wanting to hear his voice.  He was still watching television and not napping.

The rest of the day passed in a blur.  I kept a strong face for the sake of my students, many of whom were confused, scared, and uncertain.  Others were simply oblivious to anything going on at all.

My classroom faced the front of the building, and I watched the steady stream of parents arriving to pick up their children.  I didn’t blame them–I wanted to be in the arms of The Husband, surrounded by my loved ones, secure in knowing my family was safe.  By the last period of the day, my class was only half full.  School finally dismissed, and I wanted to collapse.  I caught up and I watched the latest updates.  The Husband arrived to take me home, and I finally allowed myself to cry.

I spoke to my father and mother, grateful that Mom’s last day of work at the Pentagon had been the week before–her retirement date had been the previous Friday.  Her office was very close to the crash site, and she was worried about her office friends.  We all agreed to let each other know if any of us managed to get hold of our relatives in New York.  I called my aunt in Maryland to let her know what we knew.  It was her birthday and all she wanted was to know if everyone was okay.  We called The Husband’s family in Michigan to let them know we were all right, although extremely shaken up.  So were they.

The images on television were far worse than what I imagined when I was still thinking they’d simply evacuate the first tower.  I cried oceans of tears.  And yet, I couldn’t tear myself away from the television.  The Husband and I stayed up late, talking and holding each other.

Over the next several days, weeks, months, we witnessed the clean-up effort, the memorials, the heroic acts of every day people.  I drove by the Pentagon and saw the gaping hole in the building.  I continued to weep as I heard of the bravery of flight attendants, pilots, firefighters, police officers, and ordinary people on that day.  I still do.

I can never forget September 11, 2001.  I, like millions of others who survived that fateful day, have a responsibility to remember it.  We must remember,  in order to memorialize those who died and to honor those who work to keep us safe.

I will never forget.