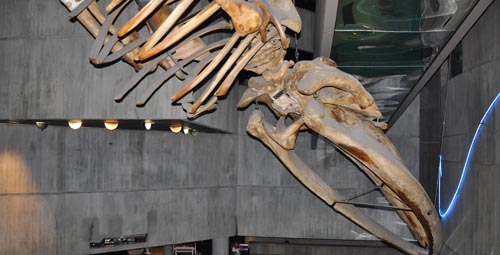 Day Trip Destination: Baltimore, Maryland — home of the Orioles, Ravens, John Waters, Johns Hopkins, “Homicide,” Barry Levinson, and one of the greatest television shows in the history of primetime, “The Wire”

Driving Distance: 35 miles from my exit on the Beltway, about 40 minutes without much traffic, or one episode of  a kids’ show on the in-theater DVD.

Baltimore’s Aquarium is one of the finest in the country, so my family of five loves to trek up to see the various sea animals. Because the ticket price is admittedly high ($24.95 per adult and $19.95 per child over the age of 3), we decided to pony up and become Members of the Aquarium, because just one visit there and one to the smaller National Aquarium right here in DC will pay for the cost of membership. Plus, the dolphin show is included in the membership admission, as well as a parking discount, which in the Inner Harbor is quite a deal. The kids enjoy staring at the various fish, getting to touch animals during the daily educational programs, and debating the freakiest or most beautiful find of the day. You can easily spend four or more hours at the Aquarium, especially if you attend one of the 3D film screenings or the Dolphin Show, like we did. 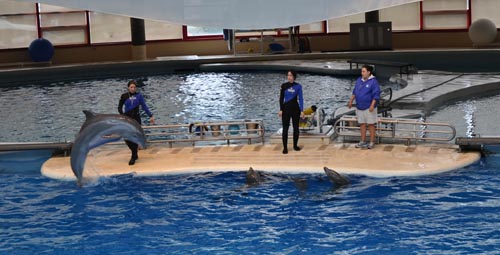 After the Dolphin Show, we walked about a mile from Inner Harbor to Fell’s Point, which is a beautiful historic waterfront community. It was our first time there, but Chowhound and Yelp convinced us it was the best place to escape the chain-restaurant landscape of the Inner Harbor for some more unique dining. After surveying our options (and the hungry kids), we decided on pizza.

Sadly we were so hungry, we forgot to take pictures of the Caesar’s Salad and Sausage & Pepperoni pizza we shared, but you can check out the BOP gallery for some mouth-watering menu items. It looks like a dive, but oh my the pizza was delicious, and we’re picky New Yorkers who are more than happy to complain about the subpar pizza choices down here (ask any of my friends who’ve had to hear about the lack of decent pizza and bagels in DC!). The schlep from Inner Harbor was so worth it to have that pizza. After the pizza, we walked around the plaza and stopped in at Pitango Gelato, which is pricey but heavenly (especially if you get a nutty flavor your husband is allergic to, so you don’t have to share!). 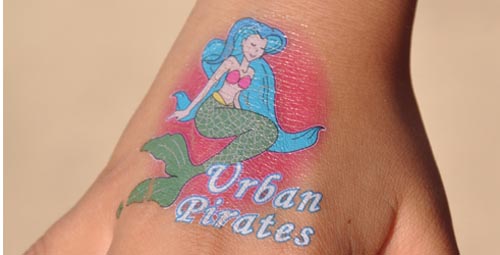 Ahoy, mateys! Urban Pirates offers hourlong cruises for your favorite young pirate. With at least four in-character personnel on the ship, our crew changed into vests, bandanas and eyepatches to join in the fun. Our three-year-old thought the waves were a bit soporific at times, so he would alternately snuggle and then run full-steam ahead to battle our ship’s “enemy” in a nearby speedboat. The cruise was a splurge (about $90 for all five of us), but our kids have been begging us to do something pirate-related for years, since we last ate at the Piratz Tavern in downtown Silver Spring. The kids on the ship before us were obviously on a birthday party excursion, but we didn’t point that out to our kids! 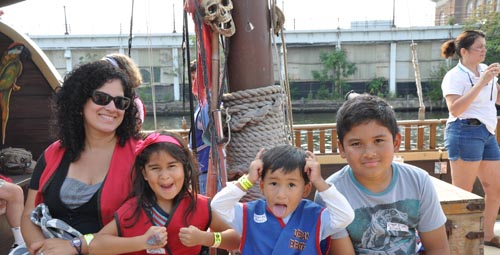 Walking back to the Inner Harbor, my family spotted the cool T-shirt shop and had to go in to take a look. We ended up buying our oldest son, a dinosaur-loving 9 year old, a cool “Paleontology” shirt and chatted with one of the co-owners, who comes up with all of the hip designs and screens them with his business partner. At only $15, I thought the unique tee was a bargain.

After our T-shirt find, the five of us headed back to the Inner Harbor in hope the Aquarium was still open, but it had just closed. We decided to have dinner, and since all of the choices were chain restaurants, we settled on crab-cake sandwiches at Phillip’s. The kids aren’t huge seafood eaters, at that point in our day trip, they were just a few minutes away from melting down, so we sped through our meals and raced back to the car, not even bothering with dessert.

Bottom line: I’m not going to lie, this was an expensive day and not something we’d repeat on a regular basis, BUT we normally go away for Labor Day weekend, so the long day trip was still less than a night at a hotel AND a day’s worth of kid-friendly activities and meals. If you want a more affordable day’s itinerary, choose either the Aquarium or the Urban Pirate cruise (I’d choose the Aquarium, since you can spend all day there, but maybe your little one would prefer the pirate adventure), but do still check out both the Inner Habor and Fell’s Point.