I Choose to Run

I Choose to Run 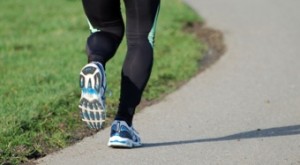 I used to be a runner.

I mean, I wasn’t a marathoner or anything, but I was someone who would run 15 to 20 miles a week and who could run six miles in an hour and still feel pretty okay.

I worked out up to mere days before the births of my first two children. I ran a 12K race up and down San Francisco streets six months after my first son was born. I loved the way it made me feel.

Then inertia gripped me with her warm, cozy hands and told me tales of a lifestyle full of sitting on couches and not running up and down flights of stairs, which I used to do not because I left my bowl of ice cream upstairs, but because it was good exercise. That inertia is trouble, man.

This marriage with inertia has led me to a place where when I look at my life, the one thing that stands out that makes me unhappy is my lack of fitness. Here’s the great thing about this unhappiness though: I can change it; I can become more fit. Hopefully if I do, my husband will stop telling me that I’m not very jolly for a fat person—and my follow-up with a punch to his gut will be stronger.

Which brings us to my current effort to run every day that my kids are in school. I put my running clothes right next to my bed, so I can roll out of bed in the morning, tie up my shoes, drop my kids at school, and hit the treadmill. If you see me at 2 p.m. still in track pants, you know I failed in my running goal for the day.

I started by queuing up all 23 discs of The Wire in my Netflix account, dusted off my treadmill, did some stretching, and set off for Day One of Project Improvement. This is how it went:

Minute One: I am awesome! I feel great! I am going to run my way into fitness!

Here’s something you may not know—if you don’t exercise for six years, that first step back on the treadmill will likely hurl you off the back into a bookshelf. Metaphorically speaking, of course.

I think you can imagine how that first workout went from there. About 25 minutes into my run, which was rapidly turning into a run/walk, I started wishing that I’d begun my running regimen with Entourage, or any other half-hour show on the planet, up to and including Two and a Half Men, which I would have happily watched if it meant I could have gotten off of the treadmill at 22 minutes.

Note: I do not endorse watching Two and a Half Men as an exercise technique or, really, for any other purpose.

At 45 minutes, when I realized that The Wire was an HBO show and therefore has no commercial breaks, meaning I had to keep moving for a full hour instead of just 42 minutes, I started to cry.

Okay, I didn’t cry, but I was a little sad. And I might have said some curse words.

Here’s the thing though: I kept moving for a full hour. Then I did the same thing the next day and the next day. And I hope to keep doing it. Sure, I only traveled three miles in that hour instead of six, but that’s three miles more than I traveled last week.

Now that I’ve broken up with Inertia, I have to find a way to start a relationship with Perseverance. I’m awesome at starting things, less good at following through. That’s why I’m watching a multi-season TV show to keep me interested.

By the time I work my way through The Wire, Breaking Bad, and Sons of Anarchy, I figure that I’ll be down at least a couple of dress sizes and be able to run to the school bus stop without breaking a sweat—and probably have picked up a nasty drug habit, based on my entertainment of choice.

Because by spring? I’m going to have to find a new thing to be unhappy about.

Stimey writes a personal blog at Stimeyland; an autism-events website for Montgomery County, Maryland, at AutMont; and a column called Autism Unexpected in the Washington Times Communities. You can find her on Twitter as @Stimey.

About the Author: Jean, a.k.a. Stimey