Have a Goosebumps Fan in Your House? Win the Newest DVDs!

Have a Goosebumps Fan in Your House? Win the Newest DVDs! 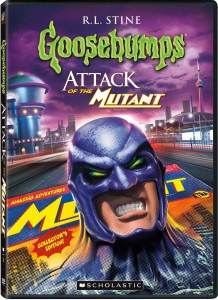 Halloween is right around the corner.  Are you ready to get some goose bumps and keep the light on to ward off the ghosts, goblins, mutants and madness?

Because Goosebumps®: Attack of the Mutant and Goosebumps®: Ghost Beach were released onto DVD TODAY from Twentieth Century Fox Home Entertainment.

With over 300 million books sold, R.L. Stine’s wildly successful children’s stories come to life with two all-new terrifying tales.  First, “Attack of the Mutant” includes “Attack of the Mutant Parts 1 & 2” and follows Skipper Matthews and his awesome comic book collection.  Skipper’s favorite is The Masked Mutant, the story of an evil, power-mad super villain who is out to gain control of the universe.  One day, while lost in a strange part of town, Skipper discovers a building that mysteriously resembles the Mutant’s secret headquarters… a building that magically disappears.  Has Skipper read one too many comic books?  Or does The Masked Mutant really exist?  The DVD also features “Phantom of the Auditorium™,” a frightening story about a young actress who is thrilled after winning the lead in the school play… until the nightmares begin as there is talk of a real phantom who has haunted the auditorium for years. 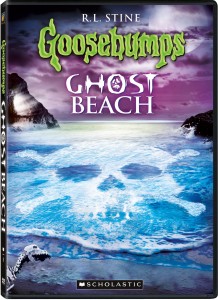 Next, Ghost Beach includes “The Barking Ghost” and follows Cooper Holmes, a young man who is scared of just about everything.  His father says he’s the only kid to scare himself on Halloween!  But as he moves into a new house, this time Cooper is not just scared of his own shadow.  In “Be Careful What You Wish For,” class klutz Samantha Byrd is the laughingstock of the girls’ basketball team.  But now, Samantha has found someone who will grant her three wishes.  Too bad she wasn’t more careful as now Sam’s wishes are turning her life into a living nightmare!  Lastly, “Ghost Beach” focuses on Jerry, who is thrilled by the prospect of exploring the dark, eerie old cave he discovered down by the beach.  When he hears the story of a 300-year-old ghost living inside, Jerry must decide if he will believe the legend or dismiss it as a silly made-up tale.

We are excited to to be able to give away a set of both DVDs to TWO lucky readers!

Simply answer the following question in the comments below for an entry to win.