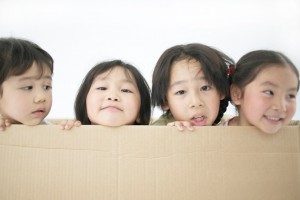 From the time I became a new mommy, I never had to go out and find a playgroup. I was lucky to have close girlfriends who had their babies within weeks of my first son, Bito’s, birth. Voila! An instant playgroup was created! We now had a reason to get together at each others’ homes: to allow our babies to crawl around and gnaw on toys. Two years after Bito’s birth, my daughter, Cupcake, came along and these same friends were kind enough to have their second-born newborns waiting as built-in playmates for her! The friendships I had with my former single gal pals deepened as we discussed sleep deprivation, the color of baby poop, what and how to feed our kids, the best double stroller to purchase, etc. We laughed and cried as we supported one another through those early years.

My girlfriends, however, did not go on to have a third child, as I did. Two years after Cupcake made her appearance, I popped out a second son (and third baby), BabyMuffin. He was easily toted along to my girlfriends’ homes, where he tagged after the older children, desperately trying to keep up. The older children always included him in their play and he has been content with his siblings and their friends. However, things are about to change.

This fall, Cupcake and her chums start kindergarten and I find BabyMuffin playgroup-less. My girlfriends, while still my gal pals, are also moving on to different phases of their lives as moms. I feel left behind and find myself wondering how to go about making new mommy friends while BabyMuffin is still a preschooler. Most playgroups for children BabyMuffin’s age are already formed and I have no idea if we’ll be able to break into one. My years of remaining comfortable with my own girlfriends and the built-in playgroup we’d created is coming back to bite me in the butt now.

Fortunately, people naturally gravitate towards BabyMuffin. He laughs easily and is always up for a fun time with whomever will play with him. BabyMuffin will have no problem in a new playgroup. He manages to find friends wherever he goes.

I should probably take a few lessons from him.