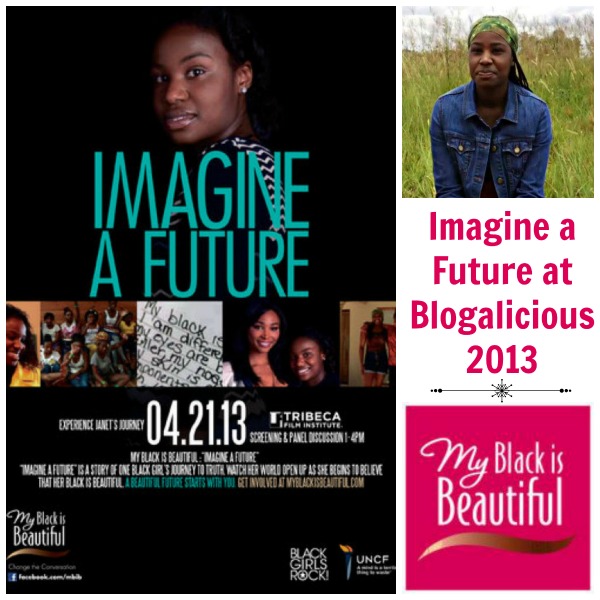 Disclosure: I received compensation for covering the Imagine a Future screening and director Q&A at Blogalicious Five, but all opinions are my own.

There’s not a single woman alive who hasn’t at one point felt ugly, fat or uncomfortable in her own skin. Self doubt is part of growing up, as is the sense that you’re not nearly as special or beautiful as your parents make you think. “Imagine a Future,” a documentary produced by Procter and Gamble’s My Black is Beautiful organization, Beverly Bond’s Black Girls Rock!, and Oscar nominee Lisa Cortés (who’s also the director), explores the ways that African-American girls in particular feel like the color of their skin, the texture of their hair, the very geography of their faces is somehow subpar — falling short of the media-dictated ideal of the light-skinned, light-eyed woman.

The documentary, which was shown at the Blogalicious conference on Oct. 4, features interviews with prominent black women like actresses Gabourey Sidibe (“Precious”) and Tatyana Ali (“The Fresh Prince of Bel-Air”), Olympic gold medalist Gabi Douglas, poet Elizabeth Miller, and others recalling their adolescent feelings of inadequacy in a culture that idolizes a very specific kind of beauty. The real star, however, is Delaware teen Janet Goldsboro, who heartbreakingly reveals that even her own extended family preferred her light-skinned cousins and made her feel like she wouldn’t amount to much given her dark skin.

Thanks to P&G’s My Black is Beautiful, Janet was able to not only attend a Black Girls Rock! mentoring camp in New York, where she met girls from around the world and learned the importance of self acceptance, but she was also sent on a once-in-a-lifetime trip to South Africa to reconnect with her roots and discover how black women are historic mothers of all civilization. The journey to South Africa teaches Janet about everything from the history of black beauty, the unfortunate legacy of Sarah Baartman, and the various ways black women celebrate their inner and outer beauty.

After the screening, the Blogalicious attendees were treated to a special Q&A session with producer-director Lisa Cortés, who spoke to the audiences on issues ranging from the necessity of teaching boys (in addition to girls) to appreciate all kinds of beauty, the fact that “being Black is not a singular expression,” and the mission of the film’s producers to ensure that girls like the lovely Janet never forget that they have worth and beauty and power.

What a powerful and sometimes tearful experience it was to watch the documentary and listen to Lisa speak. I think every girl, no matter what their racial background is, should see and discuss the film with their mothers and friends.