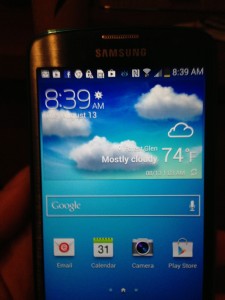 We’re indisputably an Apple device family. We have a Macbook, a Macbook Pro, a Mac Mini, an iMac, Apple TV, three iPods of various generations and two iPhones. But today, instead of talking about the latest iPhones like everyone else, I’m going to rave about the Samsung Galaxy S4 Active I was able to borrow for a few weeks.

My Apple caveat was necessary to explain why I experienced a pretty hilarious learning curve to get my Galaxy S4 to work. Androids are a mystery to me, and I kept touching and swiping like I do on the iPhone. So the button placement, despite being obvious, took me a while to figure out. My 11-year-old son, however, had no weird senior moments with the Samsung and actually took it out of my hands and gave me a little tutorial — even though he’d never seen one before!

All five of us especially loved the big 5-inch display, which made gaming and streaming on the phone considerably better than on the iPhone. The 1.5 inches made a pretty significant difference, especially when it came to reading or playing on the Apps. I read a lot, and I loved how the bigger screen made it that much easier for me to comfortably read without straining of feeling like I was getting through just a few lines at a time. And with streaming, I was able to watch trailers and shows thanks to the screen’s crisp detail. Sometimes you just need to see trailer for “Cloudy With a Chance of Meatballs 2” again and again and again.

The camera was also impressive and took fabulous photos — whether close up or far away. Here’s one my husband took of my daughter and her silly eggplant! 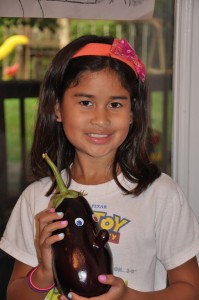 We were all equally as impressed with the battery life (17 hours of talk time, 290 hours of stand-by time after a full charge), since we are used to charging our phones every single day (seriously, I sometimes have to completely recharge at around 3-4, because I use my phone so much). The battery life made it a cinch to continuously beat my husband at Scrabble.

But one of the best things about the S4 Active is its durability. Unlike almost every other phone I’ve ever owned, the S4 Active is waterproof. We didn’t dunk it in a glass of water or anything, but we briefly had it out in the rain, and my youngest accidentally spilled a small cup of water on it, and it continued to work perfectly each time — no bag of rice or blow drying necessary. So for the price — $199 with contract — it’s an amazing phone worth crossing over from an iPhone to try!

As a thank you for reading this review, we’ve teamed with Disney apps to give four lucky winners a code to one of the following apps, which are available for the iPhone, Nook or Android phones (depending on the title).

Pigeon Presents: Mo… on the Go!: We absolutely adore Mo Willems, so this app is a particular new favorite for our kids. It takes up a good bit of space, but the kids love seeing all of Willems’ memorable characters in one place. The kids make stickers, drawings, and even dance. It costs $3.99 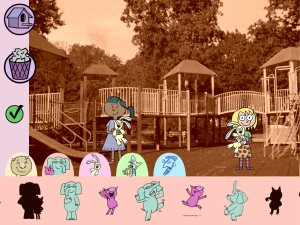 Planes: Storybook Deluxe: Fans of the latest Disney animated film will love the new “Planes” Storybook Deluxe, which explains the story of the movie’s characters, shows clips from the movie, and allows kids to “fly high” like Rusty the crop duster! It costs $6.99 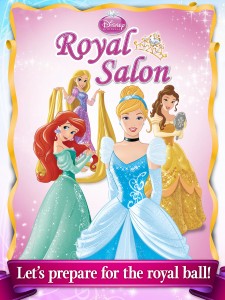 Mickey Mouse Clubhouse Paint and Play: My youngest (who’s 5) and my best friend’s three year old kept themselves busy during a long drive by passing this painting app back and forth and then watching it turn into a “3D” masterpiece. Mickey and Minnie make coloring fun, and you can save their creations onto your iPad. It’s $4.99 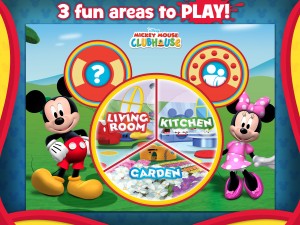 I received a review loaner of the Samsung Galaxy S4 Active from AT&T. My husband was especially sad to see it go. I was not compensated for this post, and all opinions are my own.