International Travel with Kids Ages 5 and 7

International Travel with Kids Ages 5 and 7 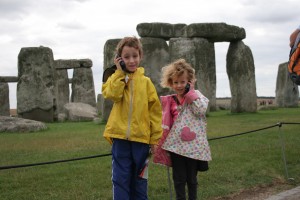 Having children changed the way my husband and I think about traveling. For one, we must carefully consider transportation. Flying can not only be expensive, it can be extremely painful or tiring if a child decides he has lost his ability to sit still, or if the child has decided that the only way she can tolerate the flight is if a parent reads fairy tales to her non-stop. She might also opt for using a parent and a brother as a jungle gym – a memory from 2008 that has yet to fade.  My kids were both screamers in the car, and by that I mean, from the moment I set them in their carseats to the moment I freed them from that bondage, they screamed. For over a year, each of them screamed. How I did not run my car into a tree I still do not know. Even now, I am extremely cautious about putting either of them in the car.

But about a year ago, a family in England contacted my husband and I and indicated they were interested in exchanging homes the next summer. The timing seemed to work well, and other than the fact that we’d be trapped on a plane for 6 hours, the trip seemed almost doable. Close enough, that we accepted the offer and agreed to exchange homes. There are a lot of upsides to home exchange, but one not so obvious downside is that you cannot change your mind. With other types of travel arrangements, you simply call the vendor and cancel the accommodations you have booked, and stay at home instead. But in the case of home exchanging, if you cancel, you do not have the security of your own home (unless you back out on that end of the bargain, too). Someone else is counting on having your property available to them.

And that might have been a deciding factor in not cancelling our recent trip to England and Paris. For two weeks in July, we traveled to visit family in the U.S. By the end, my children were getting a little tired. But my husband and I decided to forge on to the last two weeks of our vacation – which were to take place in England and Paris, and I am so glad we did.

Five and seven are the perfect ages for a first international travel experience. At 5, my daughter can clearly express why she is getting nutty, she can go a few days in a row without a nap, and she’s still small enough to scoop up and drag along when she decides to display her obstinate side. She’s also old enough to make interesting connections as she did in the case of Westminster Abbey, when she excitedly reported “this is where the coronation took place of the queen that we saw photos of in Buckingham Palace! And the wedding!” England, as it turns out, is a princess lover’s dream.

At 7, my son had just finished studying Ancient Egypt, so a trip to the British Museum proved a fascinating adventure for him. He was able to grasp much of the history as we traveled throughout England. He can take long walks through the countryside without tiring too much, and he can melt into his Kindle when travel gets to be a bit too much. He can also mock his father for driving on the wrong side of the road, which provided welcome comic relief at an otherwise tense moment.

At 5 and 7, children can understand that the world is bigger than the places they travel each day, and they can begin to grasp the fact that elsewhere, the bread is better and not everyone speaks English. Paris, as it turns out, was amazing with kids. Both of my children were old enough to enjoy a walk through Monmarte led by a Paris Walks tour guide who brilliantly knew how to bring children into the fold without losing adults. She was almost as adept at it as the beefeater a few days earlier at the Tower of London.

Traveling with a 5 and 7 year old can also benefit the adults in the group. It is my tendency, when in new places, to race about seeing as many things as possible. That is a terrible idea with children. It will no doubt result in everyone wishing they were elsewhere. Instead, we built in trips to playgrounds, parks, and general quiet spaces – which proved great for children running and adults digesting the recently acquired information. It might have changed the way I look at travel forever.

I was terrified of traveling such a long distance with my children. But I’ll do it again. Just as soon as I can afford the plane tickets!

When not dreaming up vacations, Elaine blogs about the daily grind with children at Connor and Helen Grow Up!