The wind blew Mary Poppins into Arlington last weekend, and she’ll be returning for four more shows July 21 through July 24. Encore Stage & Studio is “theatre by kids for kids,” but in the summer, they do a production that includes professional actors.

So this show has a different feel than the ones through the year as adults are played by actual adults! Mary is played by 23-year-old Kaely Clapper, whose strong voice makes it no surprise she’s a graduate student in vocal pedagogy! She’s got the enigmatic nanny character down; you never really know what that woman is up to, but you know it’s going to be good in the end.

One thing you might wonder about is the flying. It happens! This show has Mary – and once, even Bert! – on cables courtesy of Flying by Foy. Mary glides effortlessly, umbrella in hand. Bert gets to do a few flips during “Step In Time.” 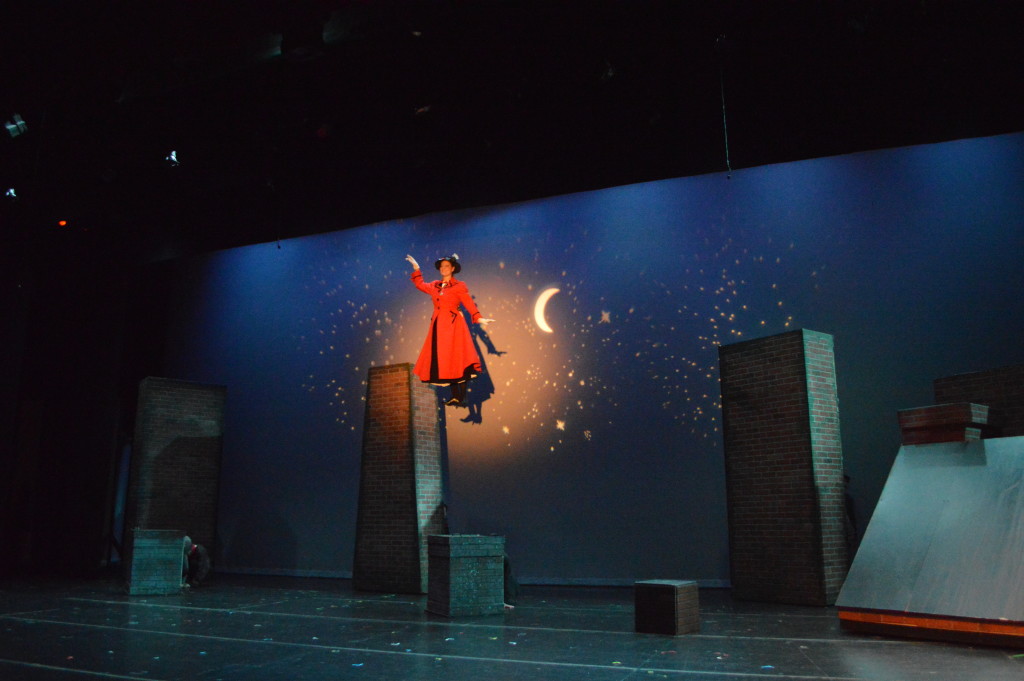 Kristen Jepperson, who played Mrs. Banks, provided a solid foundation of the production. She had a great range of emotion, and a voice that was both strong and nuanced. My 10-year-old son offered on his own that he really liked her; she was very expressive, he said! I asked what he thought of the mean Miss Andrew, Mr. Banks’ long-lost and better-forgotten nanny, the woman apparently responsible for his utter lack of ability to enjoy life. He agreed with my assessment that actor Megan Mack was hilarious. Scary but in a comic-relief sort of way.

If you haven’t seen the film in a while, you might remember the story a little more light-hearted than it really is, and if you have never seen the play, you might be surprised at some differences, including the return of Miss Andrew. There’s also the fact that Mrs. Banks is not fighting for women’s suffrage but is instead grappling with her own loss of identity since marrying a man whose light-hearted veneer during their courting was apparently only a thin coating on top of a heart filled with anguish. 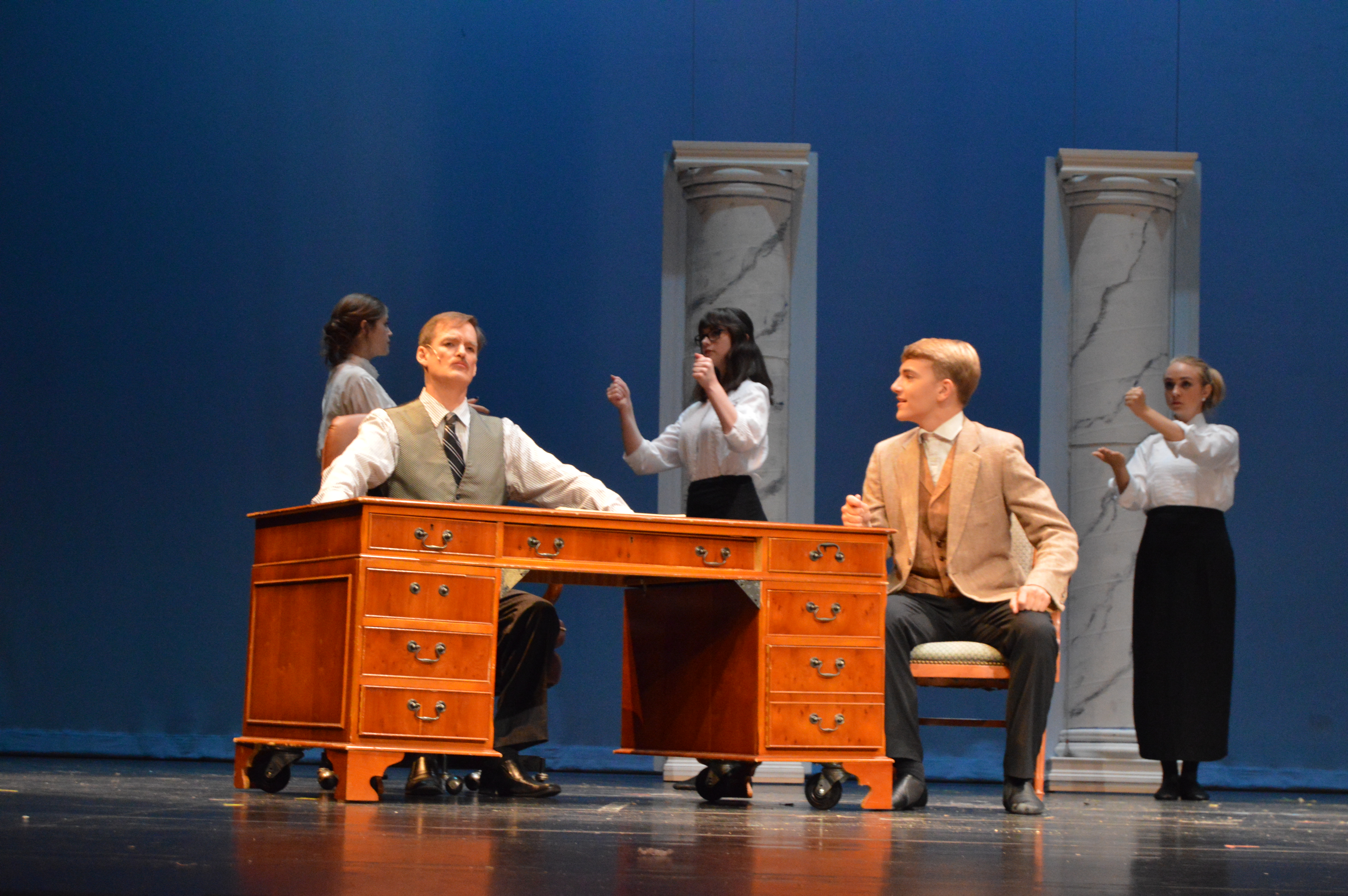 Poor Winifred has lost her acting career, her friends, control of her mischievous children, and her hope at happiness. I don’t think it’s a huge spoiler to say that she settles on being happy as a mom, even though she’s offered a return to acting. Just a warning not to go into the story looking for a radical feminist twist!

My family and I have been to countless Encore shows, but it was the first time we knew a cast member. Aidan Pritchard, who played Michael Banks, and my son had the same role at my son’s school, Aidan in the 5th grade cast and my son in the 4th. Having been to lots of play practices and having seen Aidan lead our school community meeting in song many times, my daughter holds a special place in her heart for Aidan. It was fun to see him do so well. He and stage sister Brenna Kay, who played Jane Banks, were very well matched and sang beautifully together. They were a great duo. 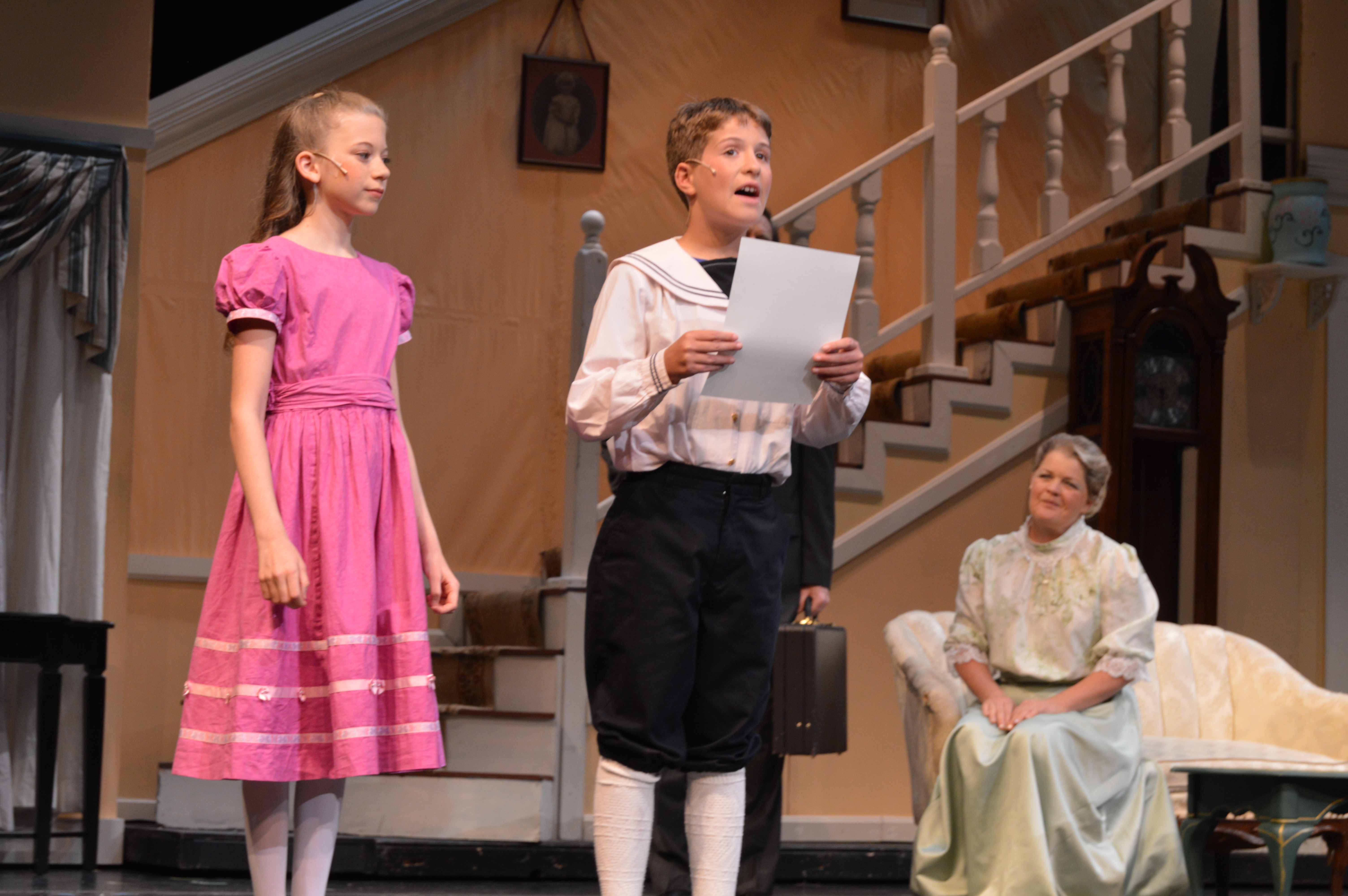 I think my daughter being so keen to watch Aidan’s every move might have helped her keep her focus through what is a pretty long show at over two and a half hours. If your youngsters are under 7 and/or have a short attention span, you might opt for some aisle seats so you can duck out and watch the performance on the screen in the lobby if they need a break.

Standout ensemble numbers you’ll want to be in the theatre for include “Supercalifragilisticexpialidocious” and “Jolly Holiday” in the first act, which runs close to an hour and a half, and “Step in Time” in the second act. 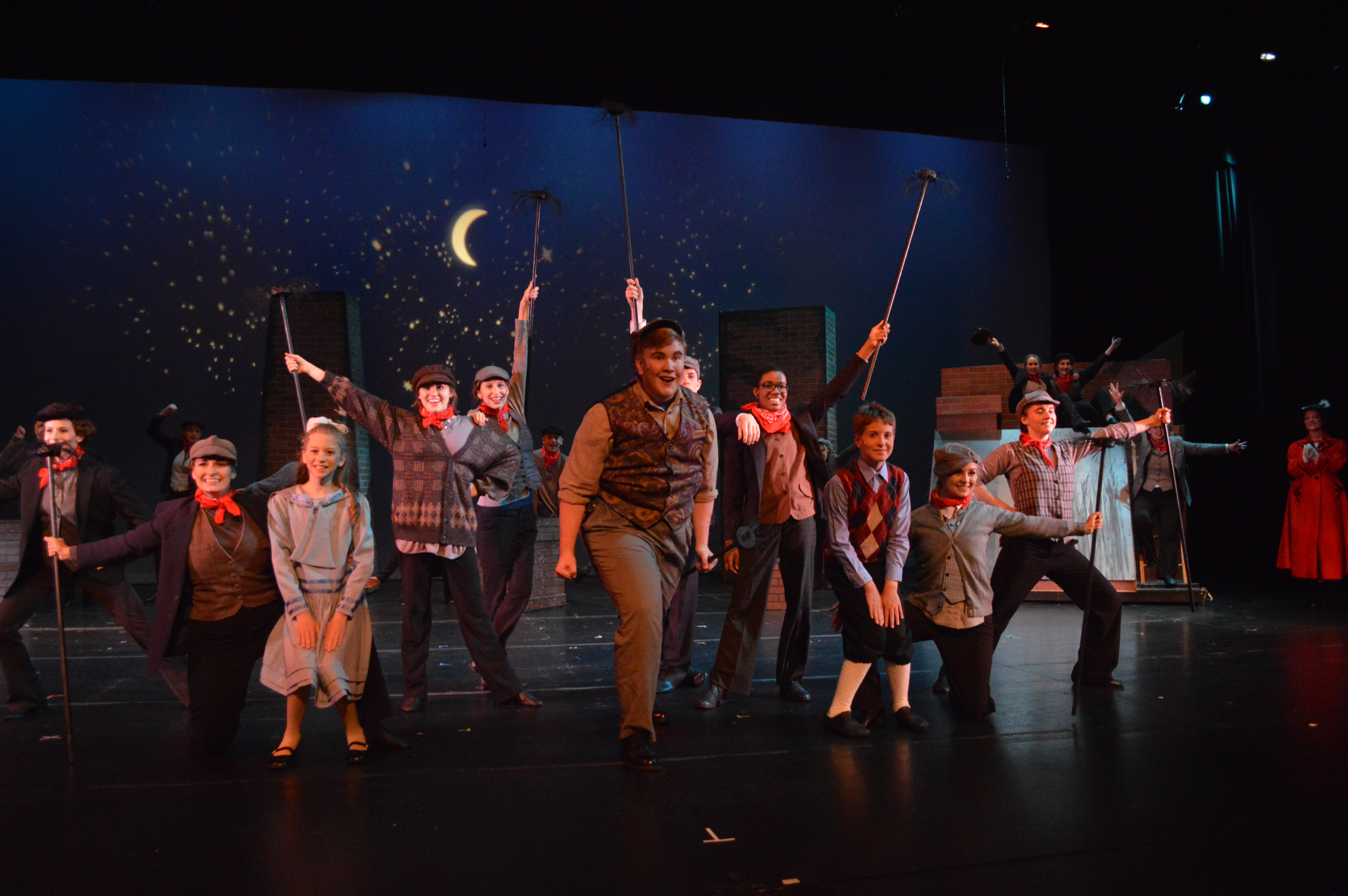 Miss Andrew’s funny but mean song is “Brimstone and Treacle;” it might be a little scary for younger ones, especially if they’ve had bad experiences with babysitters!

Plan for a full three hours to be at the theatre if you go this weekend, when shows run at 7:30 on Thursday, Friday, and Saturday and at 2 p.m. on Saturday and Sunday. Note that cast members don’t come out in costume to greet audiences at summer Encore shows the way they do during the year. 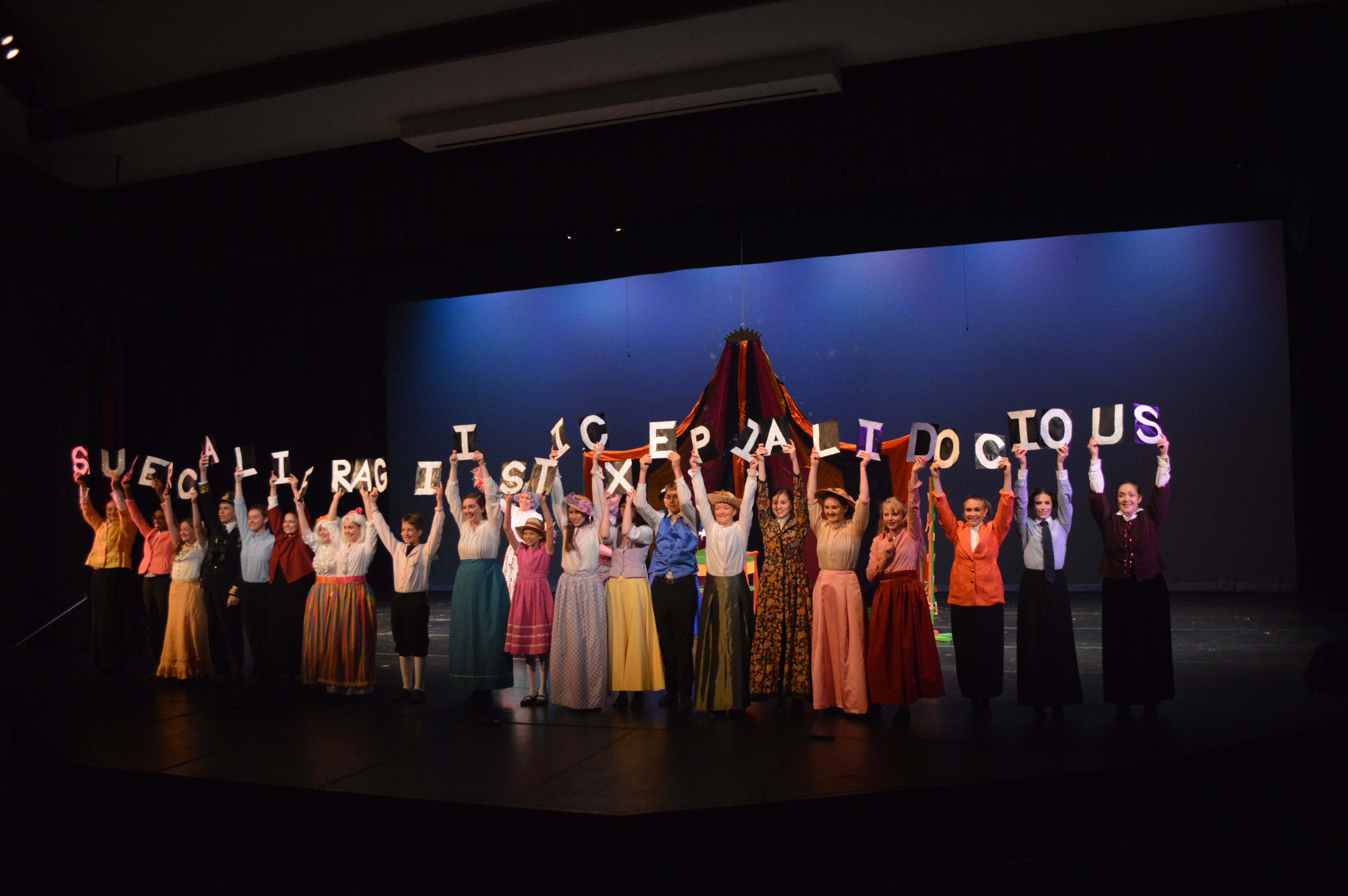 See “A Spoonful of Sugar” on Good Morning Washington.

Disclosure: I received free tickets to write this review. All opinions are my own.

Jessica Claire Haney is the founder and publisher of Mindful Healthy Life, an online lifestyle magazine for natural-minded parents in Metro DC. Her personal blog is Crunchy-Chewy Mama.