I recently read this article from The Guardian newspaper. It made me think.

In case you don’t have the time to read it (though you really should), I’ll briefly go over its main points: 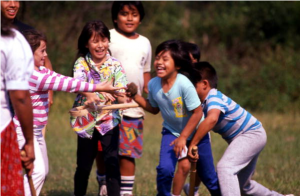 So I read the first parts and patted myself on the back because, as a classic approval-seeker, I like it when people say I’m doing it right. Hooray for attachment parenting, which just happened to be what worked for me and my kids.

But then I got to the rest. Autonomy, you say. Freedom makes happiness. That’s lovely.

Letting them run wild in packs to socialize themselves? Haven’t you read Lord of the Flies? (What do you mean, that’s fiction? It’s clearly a well-researched thesis founded in evident fact describing what happens when you leave children alone to form their own society.)

Finding their own food when the mood strikes? That’s all very well when they can rummage for a strip of smoked reindeer meat or catch themselves a fish, but if what they’re most likely to find is my hidden stash of chocolate chip cookies – that’s not going to turn out well, is it?

Going to bed when they want to? All very well if nobody has to get up for school in the morning, and if the children are outside in the midnight sun entertaining each other whittling sticks or whatever it is they’re doing, but if they’re in my house and I want to watch Doctor Who and eat my chocolate-chip cookies in peace, I want them to be asleep before I am. Not to mention my friend who went to bed with her baby and left the six-year-old downstairs with Daddy, assuming he’d tell her when it was time to retire. At one a.m. my friend happened to wake, discovered the big girl was not in bed, went downstairs, and found her happily playing Barbies. I know that’s exactly what my four-year-old would do, if left to her own devices.

Okay, so I could wax cynical about this for a while, but the obvious truth is that we don’t live in tribal-type societies where it’s fine for all the kids to run in packs and socialize each other without adult intervention. We mostly live in nuclear-type families who all, like it or not, do have schedules. I’d get into big trouble with the other parents on the playground if I was the only one whose kids had no imposed boundaries – this has to be a society-wide thing to work.

So what can we do? How can we help our children towards independence, freedom, and happiness within the constraints of our modern lifesyle? This is what I’ve been thinking about, and I’ve come up with a few ideas.

Let me leave you with the final lines of the article, because surely this is what we all strive for as parents, and it’s a mantra worth repeating to yourself as the house descends into chaos and you wonder if the small people you’re responsible for will ever make it to the land of reason and maturity, and if you’ll still be sane when it happens:

While trying hard to ignore her children in the hopes that they’ll socialize themselves, Christine is usually typing feverishly at her laptop with a cup of tea in hand, updating her blog at Awfully Chipper. All opinions are her own, and she reserves the right to change her mind tomorrow. All photos are from Flickr Creative Commons.