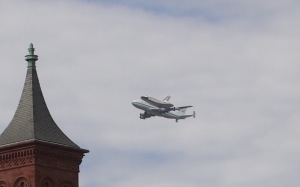 As residents in the Nation’s Capital, we’re privy to a lot of wonderful opportunities that are history in the making including today’s journey of the Space Shuttle Discovery as she traveled from Florida to her final resting place at The National Air and Space Museum Steven F. Udvar Hazy Center.

Watching from my spot on the Mall between The Smithsonian Castle and the Capitol building, witnessing the shuttle on the back of a Shuttle Carrier Aircraft was a bittersweet occasion because while it was exciting, it also marks the end of the Space Shuttle era.  So many of my childhood memories involve the Space Shuttle.  From the exciting liftoff of the first launch on April 12, 1981 to watching in disbelief as the Challenger broke apart a mere 73 seconds into its flight and hearing the incredible sonic boom of Atlantis re-entering the atmosphere as it returned to Kennedy Space Center after its final mission.  Those moments were inspiring, heartbreaking, and just plain cool and will forever live on in my memory.

What’s next for NASA?  NASA plans to continue their exploration, technology development, and scientific research.  There is a new International Space Station for collaborative work with 15 countries and the new Space Launch System will transport astronauts well beyond the orbit ability of the space shuttle fleet. Certainly this new chapter in space exploration is exciting and will inspire a new generation of kids but it makes me a little nostalgic knowing that it’s happening without our Nation’s beloved Space Shuttles.

Leticia Barr is the founder of  Tech Savvy Mama and is Parents.com’s Tech Savvy Parents columnist.  She can be found on Twitter @TechSavvyMama, Facebook, and sharing her favorite finds on Pinterest.

About the Author: Leticia Barr

Leticia is the founder of Tech Savvy Mama, a site that assists parents in finding the best technology products, websites, and resources for children of all ages. She uses her experience as a former teacher and technology specialist for a large DC Metro area school system to evaluate the many different kinds of technology that come through her door and loves sharing honest feedback to make recommendations to her readers. Leticia splits her day between serving as a family internet safety and security expert (aka Chief BitMom) for BitDefender and being a mom and her nights between blogging at her own site, writing for The LeapFrog Community and Mom Blog Magazine, consulting for educational companies like PBS Teachers and Virtual Nerd, working behind the scenes on the MyBlogalicious site, and Tweeting. Frequently asked how she does it all, she replies that she doesn't sleep much!