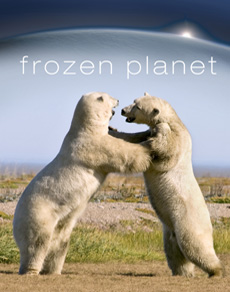 Earth Day might be over, but it’s always a good thing to expose our kids to nature and wildlife issues. Even if there’s little chance your family ever travel to the remote North and South Pole, what happens there is still important. That’s why I love the documentary “Frozen Planet,” which aired on Discovery last month. BBC, which produced the breathtaking documentary series along with Discovery, has offered us two copies of the complete series on DVD for our readers.

The three-disc series includes not only the entire series that aired on Discovery but also 90 minutes of unaired footage and four hours of extras my nature-loving kiddos were just as excited about as the actual film! The feature about climate change is particularly educational, and my kids felt so committed to the idea of helping the planet after watching it that they immediately asked what more we could do beyond the usual recycling and composting. My 10-year-old son, who has been studying legendary oceanographer Jacques Cousteau for a biography project and is a budding scientist, says he hopes to visit the Poles some day. He even recognized Alastair Fothergill’s name from the other nature documentaries we’ve seen (including “Chimpanzee,” which was just released last Friday).

• On Thin Ice – A unique exploration into how climate change is affecting the animals and people of the polar regions and what that might mean for the rest of us.
• Science at the Ends of the Earth – An examination of the remarkable scientific work being performed at the South Pole
• Freeze Frame – A series of 6 10-minute “making of” featurettes, one for each episode.
• Production Video Diaries – A set of 47 video shorts made by the Frozen Planet producers, directors, camera crew and more giving personal insights into this remarkable series.
• Frozen Planet: The Epic Journey – The best moments from this remarkable series compiled into one 60-minute highlights special

To enter the giveaway for the DVD, just fill out the Rafflecopter form below.

I received a review copy of the DVD courtesy of BBC, but as a career-long entertainment writer, screeners never influence my opinion of a production.

When she’s not watching cool educational programs on TV, Sandie blogs about Young Adult literature at Teen Lit Rocks and occasionally about herself at Urban Mama. Professionally, she reviews movies and books at Common Sense Media.