The Practical Side of Cloth Diapering

The Practical Side of Cloth Diapering 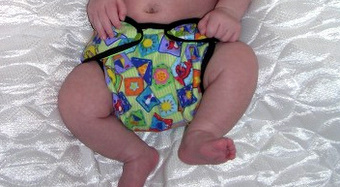 If you had told me ten years ago, before I had children, that I would cloth diaper my babies, I would have laughed at you. Laughed. The thought of cloth diapering did not even cross my mind before kids.

I am not the greenest person on the planet, although I try to do my part to help the Earth…as long as it doesn’t inconvenience me, that is. So it was with this in mind that I intended to use disposable diapers for my baby. And that I did. BabyBito was outfitted in disposable diapers throughout most of his babyhood.

With every disposable diaper I changed, I marveled at the waste created—both by the baby, and by the diaper. It amazed me to think of all the diapers used by my darling boy…and of all those disposables piling up in our diaper pail, and eventually in a landfill. And that was just by my one baby.

Three months after Bito’s first birthday, I found myself feeling familiar waves of nausea and sickness. Sure enough, a home pregnancy test confirmed that another little one was to be expected. The Husband and I examined our finances closely, and realized a need to trim all excess costs in order for me to continue to stay home with our children.

Bito would be two when his baby sibling was born, and would not be potty trained yet (I assumed). With two in diapers, it made sense to see if we could cut costs there. It was with this in mind that I started to research cloth diapering.

I was not thrilled with the thought of washing my own cloth diapers, but two to three extra loads of laundry per week did not bother me as much as the dollars that would be spent to diaper two in disposables. I inherited a stash of cloth diapers from a friend, but more importantly, I gleaned a lot of valuable information from her on how to use and wash different types of cloth diapers. There is a learning curve with cloth diapering, and I was overwhelmed at first. The best piece of advice my friend gave me, however, was to take it slowly. Even if I only managed to use one cloth diaper per day, that was still one fewer disposable diapers that had been used.

Soon my confidence in grew, and a remarkable change occurred: I began to enjoy the challenge of diapering BabyCupcake in cloth! I adored putting my baby girl in cloth diapers, which made her booty adorably enormous. Even The Husband, who had been adamantly opposed to switching completely to cloth, admitted that it was not that bad. And so we made the decision to expand our cloth diapering stash to outfit our two year old, Bito. He was, after all, not yet potty-trained, and BabyCupcake would eventually be able to utilize the same cloth diapers.

It was with the third baby that the real savings kicked in, since the initial investment of procuring the cloth diapers had already been made. By the time BabyMuffin came along, The Husband and I were pros at the whole process. I also found that my outlook on our planet, and on trying to be a greener person, had changed as well. I felt like a green mama, and tried to find more ways to express that in my daily life.

Now that I no longer have any kids in diapers, I’ve passed on as much of my cloth diapering stash and knowledge to a new cloth diapering mom. If I had to do it over again…I would’ve started with cloth diapering sooner. I regret the two years that our Bito spent in disposables.