Halloween habits: Must treats be sweet?

Halloween habits: Must treats be sweet?

What is Halloween without the candy? Plenty of fun! Granted, it was easier to keep my son in the dark about the relationship between Halloween and candy when he was two and a half. Now that he’s in kindergarten, he knows the score. 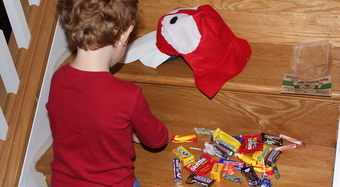 But that first major year of celebrating—candy-free—in my community taught me that we really can create our own traditions and that the fun is not always all wrapped up in memories of the way we did things when we were kids. That toddler Halloween day was about parades and friends, dressing up, and playing outside, and it was a great time.

Last year, at age four, though, my son was well aware what everyone was getting in their treat-or-treat bags, but he expressed no desire to eat any of it. He and I are gluten-free, so he understands that a lot of mainstream foods are just not for him. (And maybe we let him believe that some stuff we don’t want him to have has gluten. Sue me.) We’re pretty close to a no-sugar house, mostly because I know how terrible it makes me feel, but also because I can tell he is not far behind in the sugar sensitivity department. When he has it, we all pay. As far as I’m concerned, no one but his taste buds stands to gain anything by including candy in our lives, so for the most part we don’t.

What then, do we do with all the booty from that door-to-door scavenging? Give it to the Switch Witch, of course!

I learned about the Switch Witch when my chapter of Holistic Moms Network had a Moms Night Out about “holistic Halloween” ideas. The idea is that children who believe in the Switch Witch can put out their candy at night and expect her to turn it into something else before morning. We put out all our candy, but you could also suggest, as Charity O’Neill-O’Kane does in her children’s book, that the child save his or her three favorite pieces and give over the rest.

My son has received things he’s asked for in a store and that I’d be happy for him to have, but that I’m 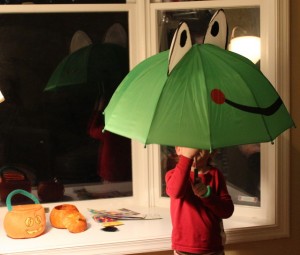 not going to just cave and buy on the spot. Last year, he’d been asking for an umbrella, and the Switch Witch apparently remembered that he’d been a frog the year before, so he got a green frog umbrella along with some seasonal-themed stickers and crafts from A.C. Moore (which, by the way, rewards procrastinators by heavily discounting holiday items on the day of and sometimes even a week or two before).

In our house, the Switch Witch also brings her crafty surprises after other holiday parties or birthday parties with overwhelmingly sweet goodie bags. We occasionally have to write her a note requesting that she come, and we understand that we might have to wait a day if she wasn’t expecting to make a visit. 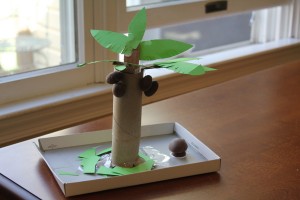 anything that makes candy just a material and not something exciting solely for consumption.

I won’t say that my son doesn’t occasionally lack graciousness with what he is given by the Switch Witch. This strategy is not a panacea for greediness, just for keeping blood sugar levels under control and my kid’s body dye-free. But for the most part, he’s still willing to play the game (fingers crossed for this year!).

It probably helps that his parents don’t consume candy or give out candy. (We’ve been doing tattoos and mood pencils for the past few years, but I need to head over the Green Halloween for some ideas on how to change it up this year, I think).

Without sounding judgmental against the rest of the world, we just try to be clear about our belief that candy is not good for our bodies because it makes us jumpy and not able to sleep. Other people can eat it. We can get other stuff. Just two different options.

I wonder what the Switch Witch will “magic” the candy into this year. Better get on that!

How do you manage the Halloween haul? And its aftereffects?

A Pepsi addict at the age of eight, Jessica Claire Haney now walks the walk so that her son will have a shot at better health than she has. She blogs at Crunchy-Chewy Mama about living naturally. Most of the time.