When Danielle Leach’s son was diagnosed with a cancerous brain tumor, she had one advantage over many of the parents in the childhood cancer community: she knew her way around the cancer world. Having watched her sister survive childhood cancer, Leach later worked in the field, helping patients navigate the structure of the hospital and treatment options. Compared to other parents, Leach had a head-start in her journey through cancer with three-year-old Mason. 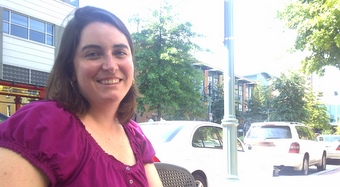 And yet, the challenge of finding the right treatment for her son while simultaneously caring for his older brother was intense. Nearly four years after Mason’s death, Leach has turned her grief into action. The week before Leach was to shave her head as part of the September 21 “46 Mommas: Shave for the Brave” event at Washington, D.C.’s Union Station, I sat down with her to learn more about her journey through childhood cancer and the passion behind her activism.

“It’s worth every hair on my head if some other family doesn’t have to go through what I did or what their child suffer like I did,” she said. Most people are not aware that cancer is the number one disease killer of children, she explained, and they also don’t understand what a funding problem there is on childhood cancer.

Only 4% of the National Cancer Institute’s budget goes toward childhood cancer – about as much money as would fund 10 hours of the U.S. military operation in Iraq, Leach said. Only one cancer drug has been approved by the FDA for use in children in the last 20 years. “One drug when thousands of children are dealing with twelve different types of childhood cancer,” Leach noted. “We can and have to do better than that for our children.”

“Researchers tell us they’re close,” she said of finding new and better medication solutions as well as causes of what turns cancer genes on and off. Now that half of all chemotherapy drugs given to children have been around for over 25 years, it’s time for better options. But developing those options takes money, and it takes researchers valuable time outside the labs to drum up the funding. Since the market is so small, pharmaceutical companies don’t invest in childhood cancer research. And, Leach says, “We can’t wait for Congress” to fill the pressing funding needs.

Enter 46 Mommas, a group of parents who have assembled a “class” of mothers to shave their heads Wednesday at Union Station to show solidarity with their children who have had cancer, to raise awareness about the issue, and to raise much-needed funds. The goal is $1 million over the two years, and they are over halfway there.

The number 46 is significant: each weekday, approximately 46 families learn that their child has cancer. This is the second year of the 46 Mommas head-shaving event, which will be accompanied by lobbying efforts on the Hill and a pediatric cancer summit in the days to follow.

Proceeds from the event will go to St. Baldrick’s Foundation, which Leach says is the largest funder of childhood cancer research outside of the U.S. government and has the largest impact across the country. “Researchers are looking for what turns on and off” cancer genes, she said, and to develop less toxic protocols so that survivors will not face as many health challenges later in life. Without funding, that research can’t get done, and treatment options remain limited.

Members of the public are invited to turn out to support the 46 Mommas at Union Station on Wednesday. The event will kick off with at 5:00 p.m. in the center of the main hall with words from reporter and emcee Angie Goff and Children’s Oncology Group Chair Dr. Peter Abramson. The head-shaving is expected to begin around 5:20 p.m. with family members taking the first swipe in many cases. PR at Partners will perform the rest of the honors, and participants with hair at least 8 inches long will donate it to Wigs for Kids. Over the next two and a half hours, six women at a time will have their heads shaven. Five special slots are reserved for those interested in shaving their heads in solidarity with the women that evening.

Many of the 46 Mommas have lost children, some have children in treatment, and some have children who are cured, but they live in fear of cancer returning or other health problems. Leach and one other mom hail from, but the majority of mothers are traveling hundreds and in some cases thousands of miles to participate in the event. 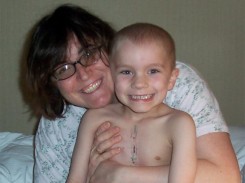 There will be a children’s area on hand at the event, and Leach suggested that parents attending with their kids explain that the event is to support children who sick. Resources at SuperSibs and the Fox Chase Cancer Center share more tips on talking with kids about cancer.

Donations can be made to St. Baldrick’s Foundation by visiting www.StBaldricks.org, where you’ll also find other suggestions for action during Childhood Cancer Awareness Month. The46 Mommas website lists helpful facts and suggestions for other ways to get involved on its website. Leach noted that doing something simple like a bake sale or other fundraiser can be an excellent opportunity to engage children in an act of service for a cause that can be scary to talk about. And just making a point to skip coffee for a few days to donate $10 to the event shows our children we can make the time to care and to put compassion in action.

The group hopes to put itself out of existence someday once childhood cancer has better prevention and treatment. But until then, these mommas are on a mission to raise awareness and research funds.

Because hair goes back; children don’t.