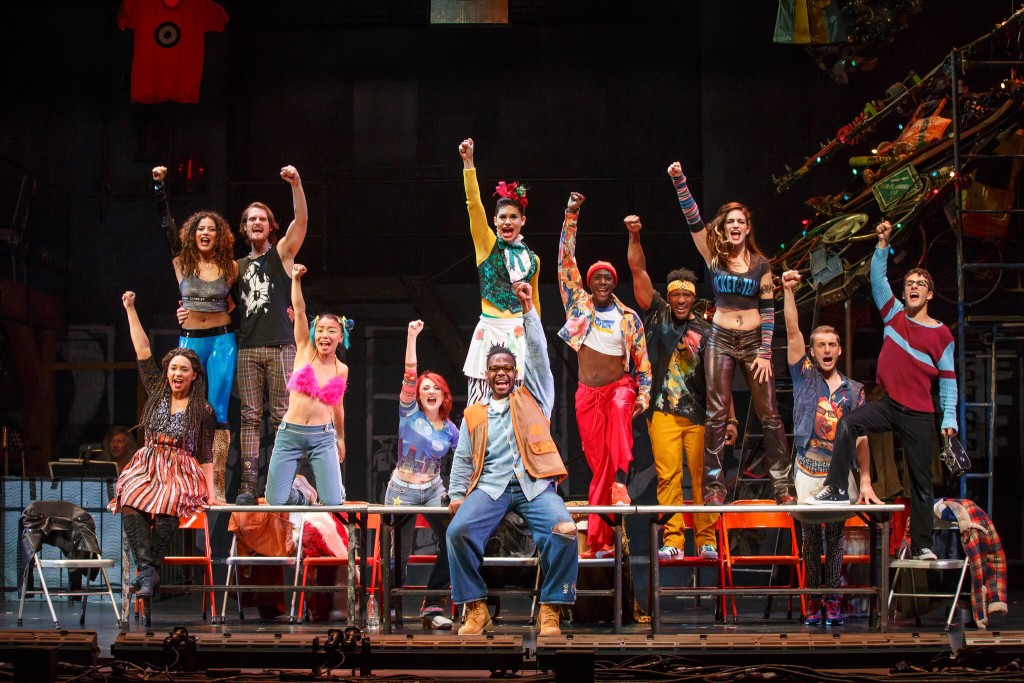 This post was written by special contributors Beth and Abby Weaver.

The 20th anniversary tour of RENT, wrapping this week at the National Theatre, wows the audience.  Based on Giacomo Puccini’s “La Bohème,” this Pulitzer Prize and Tony Award-winning rock musical follows the lives of seven struggling artists during one year against the backdrop of the AIDS epidemic in New York.

The show’s creator, Jonathan Larson, died suddenly the night before RENT’s off-Broadway premiere in January 1996.  The show then moved to Broadway where it became a smash hit.

On opening night in D.C., the anticipation in the theater was hyper-charged as the audience waited for the newest generation of actors to perform this groundbreaking musical.  My teenage daughter was surprised and delighted that so many RENT-Heads, old and new, were singing along to the iconic musical score from “Seasons of Love” to “Light My Candle” to “La Vie Bohème.”

Watch a clip of “Seasons of Love”

The cast all sang beautifully, but sometimes it was a bit challenging to hear them over the band and the audience participants. And, as first-timers to RENT, we wanted to listen to each and every word!

The ensemble added great voices and multiple character changes providing each actor the opportunity to be in many of the essential minor roles of the production.  Those roles included nagging mothers, hopeless homeless persons, and intimidating police officers. These solid performances assisted the musical’s all-around success.

The entire cast was electric, but the performances of theater novices Aaron Harrington (Tom Collins) and David Merino (Angel) were especially riveting.  Merino, in a playful Santa suit and platform heels, projected boundless energy and enthusiasm during his professional debut on a break from his studies at NYU.  Harrington, also new to the musical theater stage, delivered an amazing, tear-jerking performance of “I’ll Cover You.”

RENT’s timeless message of love and hope continues to inspire—535,600 minutes—year in and year out.

Beth Weaver provides communications and marketing counsel to nonprofit and advocacy clients; Abby Weaver is a rising senior at an area high school.