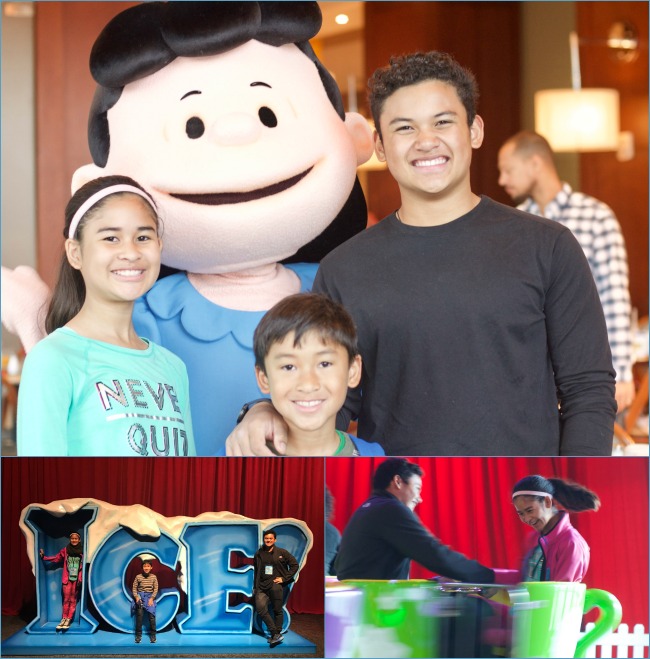 The Gaylord National Resort and Convention Center has once again ushered in a cool start to the Christmas season with its annual “Christmas on the Potomac” celebration, highlighted by its amazing ICE! display.

ICE! involves two million pounds of hand-carved ice sculptures in a building kept at 9 degrees. Visitors can tour room after room of ice sculptures crafted by artisans from Harbin, a city in northeastern China famous for its ice festival featuring frozen temples, memorials, and other sculptures.  The Gaylord, essentially, has taken a small part of one of the world’s man-made wonders and relocated it to National Harbor.

This year’s theme for ICE! Is “Christmas Around the World.”  After donning parka provided by the Gaylord, visitors can walk among brightly colored displays yuletide celebrations from Germany, Ethiopia, the United Kingdom, and other countries.  Other rooms include cartoon-like, figures in traditional dress from around the world.  Their costumes reflect the amazing carving skills of the Harbin artists. 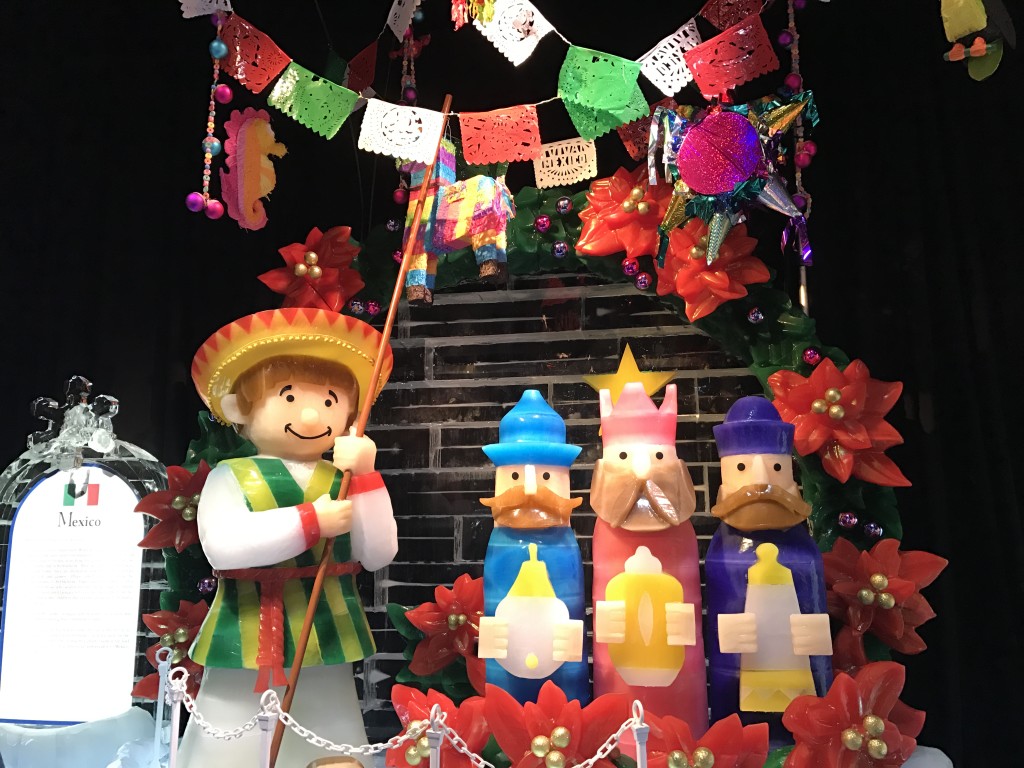 In one room, called the “Frostbite Factory,” a handful of Harbin artisans continue to carve ice sculptures right in front of guests. From there, guests can watch blocks of ice transform into angel wings, toy wagons, and little international Christmas-celebrating figurines. While we were there, we watched an artist sheepishly try to pick up the iPhone that had fallen out of his parka. He had to remove two pairs of gloves to get his earphones plugged back in. Which brings up visitor tip one: if you keep your iphone out in your hand to take pictures, expect it to shut off due to the cold halfway through the exhibit. It should come back on after you rejoin the world at normal temperatures.

In the center of ICE!, though is my family’s favorite attraction: the two-story high ice slide.  Five chutes let visitors (kids and adults!) zoom down the ice on their parka-covered behinds as often as they’d like.  Which brings up visitor tip two: even though visitors are given knee-length quilted parkas, you should dress warmly before you arrive at ICE!, including hats and gloves.  The ICE! tour Is self-guided, so you can spend as much time as you’d like inside.  It’s easier to linger and appreciate the artistry of the sculptures — and to take in extra runs down the ice slide — if you can feel your fingers. 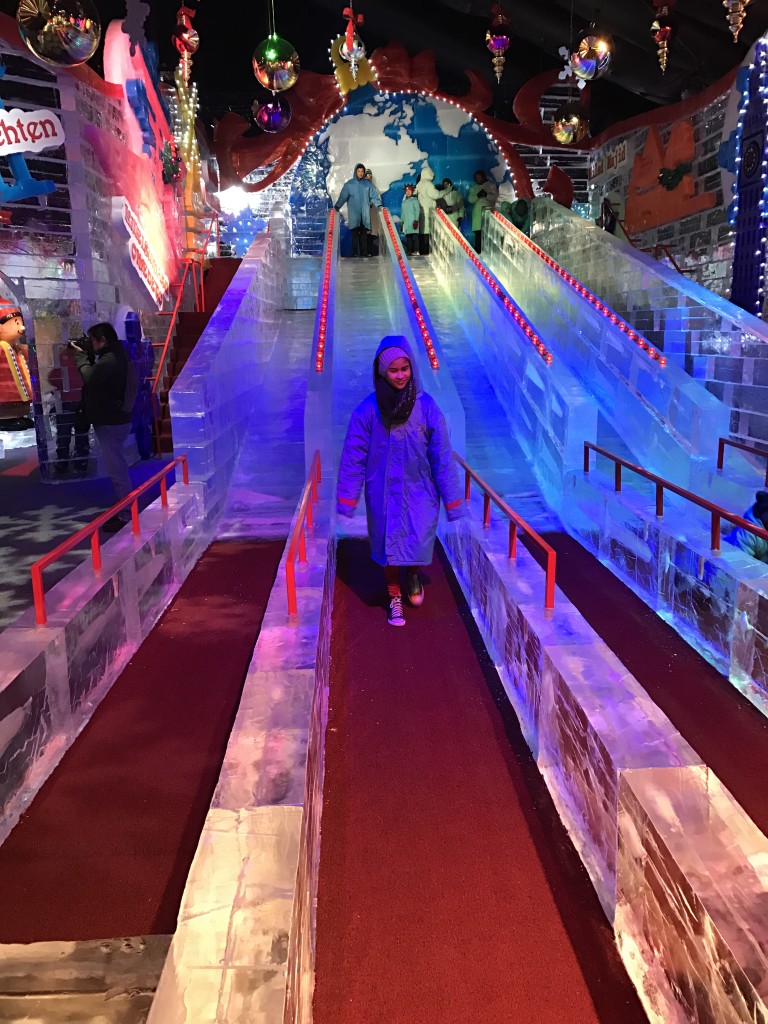 The final room of ICE! represents a change in mood and color palette from the rest of the show.  While most of ICE! features playful ice sculptures that resemble animated characters, the final room of ICE! consists solely of crystal clear, diamond-like ice shaped to form a traditional Christmas nativity scene.  An expertly carved angel at least 20 feet high towers a few feet away.  Speakers recite the biblical Christmas story, making this final stop of ICE! a Christmas attraction rather than a non-religious Holiday event. 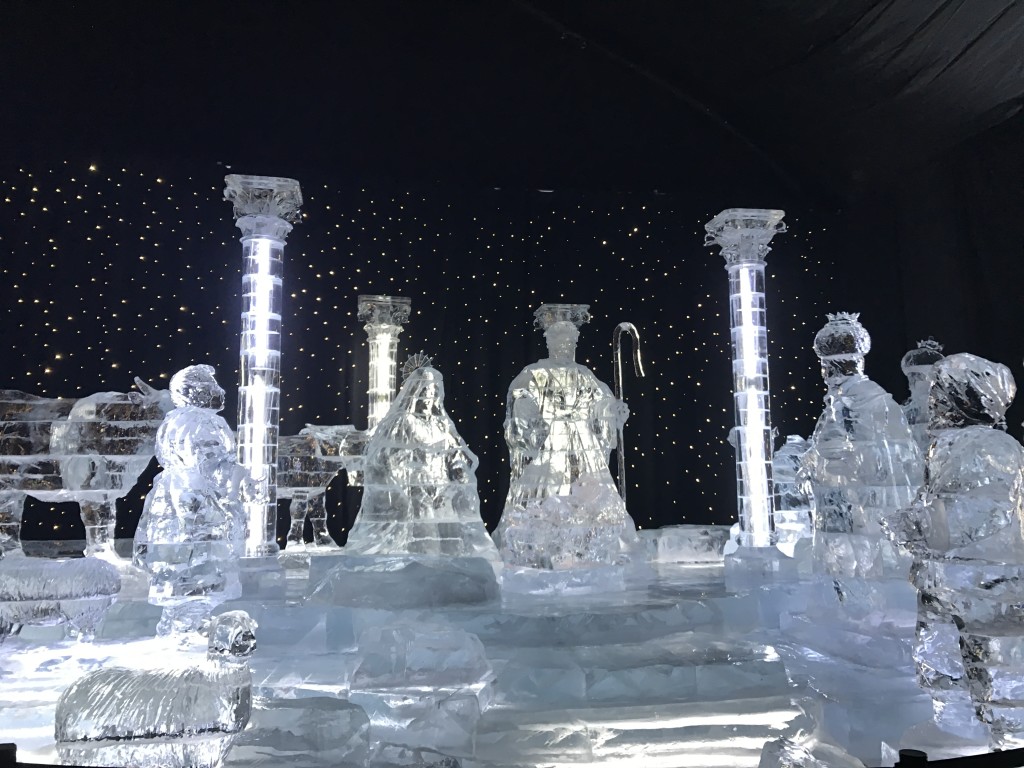 ICE! is just one part of the Gaylord’s “Christmas on the Potomac” celebration.  After leaving ICE!, guests can ride a carousel, decorate a gingerbread house, or pick out a Build-A-Bear in the expansive gift shop.  Further inside the hotel, there’s a train ride for small children, more gift shops and a laser and water fountain show under the enormous lobby’s suspended Christmas tree sculpture.

Visiting the ICE! exhibition and “Christmas on the Potomac” events have become a treasured part of my family’s holiday preparations.  This year’s sculptures were as impressive as we remembered them.

Get tickets for ICE!

My family was given complimentary passes to attend ICE! but no monetary compensation was provided. All opinions are my own.