When I was 11 years old, I saw the movie that became one of my enduring favorites of all time — DIRTY DANCING. And in DIRTY DANCING’s amazing soundtrack is the song “Big Girls Don’t Cry,” which as you probably know, is by Frankie Valli and the Four Seasons. Since my mother was a big Frankie Valli fan (she was, after all, 21 when the song came out), I of course knew all of the words. I was mesmerized by what experts have called Frankie’s “unusually powerful falsetto” — a falsetto that still surpasses even contemporary pop crooners like Justin Timberlake, Adam Levine, the Weeknd, etc. So, seeing a musical about Frankie and his pals who hit it big with “Sherry” and “Big Girls Don’t Cry” and all those other ’60s anthems — it’s a sentimental dream!

Thanks to the generosity of Allied Live, we are giving away two tickets to see JERSEY BOYS at the National Theatre in Washington D.C. next week! You only have a little over one day to enter our giveaway contest, so don’t delay! 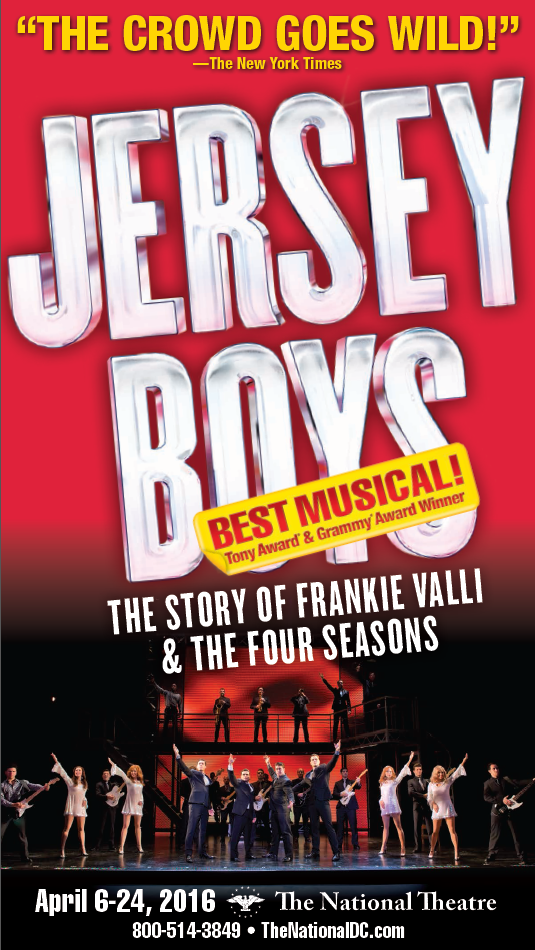 More about the show:

JERSEY BOYS is the story of Frankie Valli and The Four Seasons: Frankie Valli, Bob Gaudio, Tommy DeVito and Nick Massi. This is the true story of how a group of blue-collar boys from the wrong side of the tracks became one of the biggest American pop music sensations of all time. They wrote their own songs, invented their own sounds and sold 175 million records worldwide – all before they were thirty. The show features all their hits including “Sherry,” “Big Girls Don’t Cry,” “Oh What A Night,” “Walk Like A Man,” “Can’t Take My Eyes Off You,” and “Working My Way Back To You.”

Watch a teaser for the show:

Get tickets now or enter for a chance to win two tickets (one pair, valued at $180) to the opening night performance on Wednesday, April 6th. The randomly selected winner will receive two tickets available at Will Call for that night’s performance only. To enter, leave a comment telling us who you would take and why. One winner will be selected the afternoon of April 1st, so you must enter by 12PM ET tomorrow (Friday, April 1st).