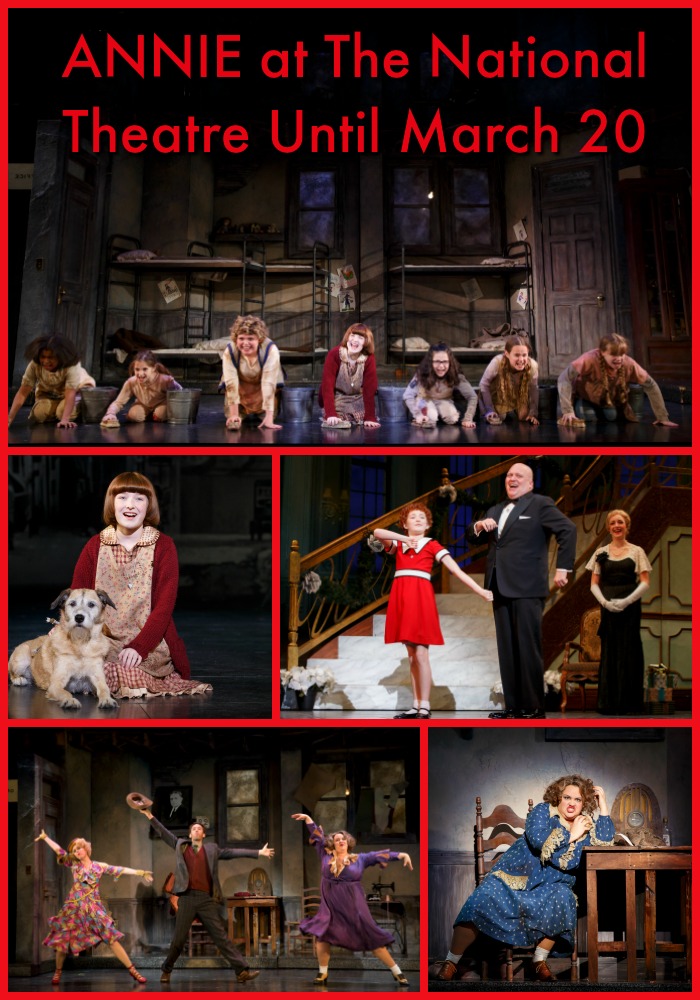 This review was written by my husband, who went to the show with our daughter and our best friend’s daughter.

For the last 40 years, “Annie” has specialized in placing adorable kids with 1,000-watt smiles onstage to delight audiences with their spunkiness and enthusiasm.  The touring production of “Annie,” now running at the National Theatre through March 20, continues that long and happy tradition.

Heidi Gray, age 11, plays the title character of the same age with the requisite wide-eyed joy.  As the red-headed orphan looking for her parents, Gray delivers “Tomorrow” with all the tonal clarity and optimistic cheeriness that make it a classic; Gray’s performance of “Maybe,” the show’s first musical number, is touching enough to make you impatient for its three reprises later in the show.   The wonderfully named Gilgamesh Taggett plays a suitably stout and stern Daddy Warbucks.  But the real showstopper is Lynn Andrews, who plays Miss Hannigan, the matron of Annie’s orphanage whose dislike of little girls is matched only by her love of alcohol.  Andrews is a belter of the first order, and when she opens her mouth wide, wonderfully rich notes emerge.  Add a complement of hammy facial expressions, and she quickly becomes the show’s most memorable character.

While it’s hard to imagine anyone leaving the show without whistling “Tomorrow,” “It’s the Hard Knock Life,” or “Easy Street,” there are a few other songs and jokes that have become dated.  When the show premiered in 1977, the historical events depicted in the show were already forty years old.  Thus, younger audience members might need a few whispered words of explanation for “We’d Like to Thank You, Herbert Hoover,” the sarcastic musical tribute to the president who led the country into the Great Depression (that song has been cut from most of the recent television and film remakes, including, of course, 2014’s modern-day version starring Jamie Foxx).

This cast, however, makes the most of even the show’s lesser-known numbers. Led by Gray and Andrews, and supported by the rest of the cast and the lovely sets, “Annie” makes for a wonderful evening and an even better tomorrow, when you find yourself still humming the show’s classic tunes.

ANNIE AT NATIONAL THEATRE UNTIL MARCH 20:

This is a limited engagement until Sunday, March 20, so get your tickets now.

Watch a montage from the musical:

Disclosure: I received complimentary tickets to the performance, but no compensation. All opinions are that of the writer.