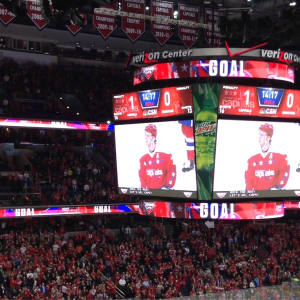 Kids’ sports have a way of becoming a family affair. In the fall, our six-year-old daughter decided she wanted to join a soccer team, so we bought cleats and shin guards and signed over our Saturdays to watch her run and kick with her first grade friends. We rearranged schedules to include Tuesday afternoon practices. When she wanted extra practice time at home, my husband kicked the ball around with her in our neighborhood park.

Some sports dreams, however, aren’t quite so simple (or inexpensive). Joining a hockey team, for example, mean hundreds of dollars in equipment simply to buy the basics. Add in team fees, which can start in the $300 range and rise quickly as players climb the ranks, plus extra fees to travel to tournaments. Want to help your child practice after hours? Extra ice time means spending more money at the nearest rink.

Recently, AAA Mid-Atlantic honored several local families who have gone above and beyond to help their children follow their hockey dreams as part of their #ShareYourJourney campaign. Eight families were chosen to watch the Washington Capitals take on the Ottawa Senators from a suite after submitting stories about their journeys with their young hockey players. I joined a few other local bloggers to learn more about what these hockey moms (and dads) have done to help their children follow their dreams.

As I chatted with parents, it became clear that hockey wasn’t just their children’s passion – in almost every case it was a family affair. Parents who played growing up or simply grew up loving hockey introduced their children to skating early hoping they’d catch the hockey bug too, and I met more than one child who started skating at the age of three. Finding the resources and making the time to help their children follow their hockey dreams became family goals, and time at the rink and on the road became family time. During the first intermission, several parents proudly shared that their children would be participating in the Caps’ Mites on Ice later in the season, and it was fun to watch the kids’ reactions as they saw their peers skating. 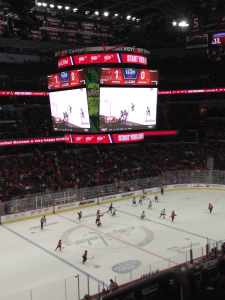 If the kids’ love of hockey wasn’t clear during the game, when one very chatty young boy rattled off hockey facts and figures with my husband for much of the second period, it was hard to miss after the game. AAA Mid-Atlantic led us down to the Verizon Center’s lower level with the promise of a surprise visit, and as we waited two of the boys struck up a hockey game to pass the time – no ice, no sticks, no puck, just a love of the game to keep them mimicking the plays they’d just seen. 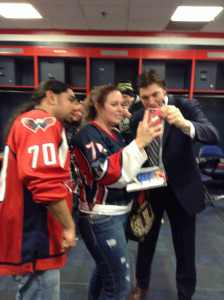 The big surprise of the night? A visit from Capitals right winger T.J. Oshie. This was no quick meet and greet – Oshie was game to make a video for one mother’s older daughter who was away at school and he called two other siblings at home. When one young fan was overwhelmed and hid in a locker, he sat down next to the boy and tried to coax him out. On our way out, his mom mentioned that this was her son’s first professional hockey game. “He doesn’t understand how special this one was!” she said in amazement, as he told his mom he’d pose for a picture with the hockey player next time.  It was a fantastic way to end a night honoring parents who have gone the extra mile for their children’s sports dreams.

Disclosure: I received complimentary tickets to the game in exchange for this post.

Allison writes about life at home in the Maryland suburbs at Home and Never Alone. You can also find her on Facebook and Twitter.