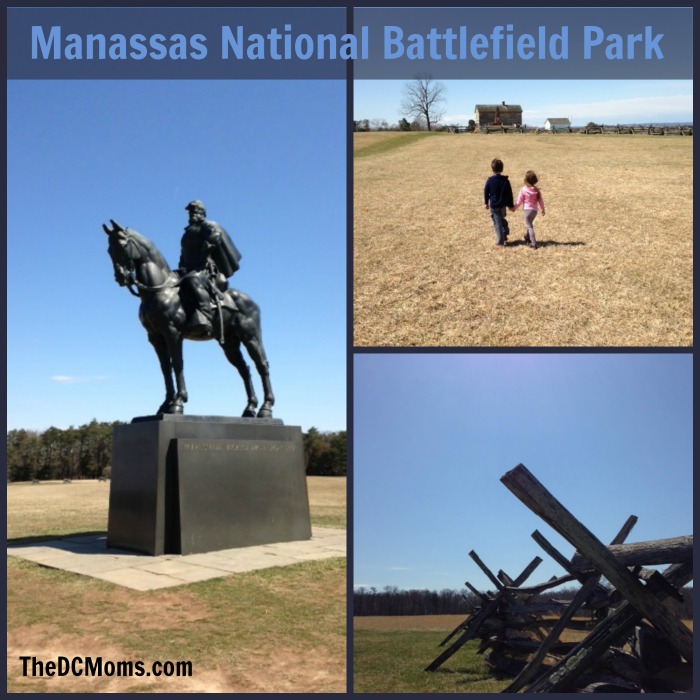 Ever since moving to Northern Virginia four months ago, I had been eager to check out the Civil War battlefields in Manassas. I was skeptical whether my four children (ages 1, 3, 6, and 9) would find it interesting or constantly be asking, “Is it time to go yet?” Our first stop was the Henry Hill Visitor Center. We walked in, waited in a short line, and paid $6 ($3 for me and $3 for my husband). Kids 15 and under are free. I asked the woman behind the counter what sights were particularly interesting for children. She asked their ages, and I told her. She paused, then said, “I can’t think of anything. They’re too young.” I walked away surprised by her response. I’m happy to say, she couldn’t have been more wrong.

In the visitor center, there are several displays of items from the battle at Manassas (Bull Run). You see uniforms with bullet holes, worn shoes, and real weapons used during the war. My 6-year-old son was in heaven seeing pieces of history up close from the fighting that went on there. When you step out of the visitor center, you see the massive empty fields and rolling hills where the battles took place. 5,000 acres of historic land are preserved to mark the battles between the Union and Confederate soldiers in July 1861 and August 1862.My kids (minus the baby who was in a jogging stroller) took off running toward the massive statue of Stonewall Jackson sitting on his horse. As we walked through the field, stopping at each historic spot on the walking tour, I was surprised at how interested my kids were in what happened. They’d look at the trees and say “Oh, that’s where soldiers must have hid” or “I can see why they chose this hilly area to attack.”

There is an impressive line of cannons on display that you can walk right up to and touch. (Hello? What kid wouldn’t like that?) At one point, my whole family ran between historic markers so the kids could feel what it was like for soldiers who “charged” to attack the enemy. In addition to the walking tour (just over a mile), there’s a driving tour to other sites. The Stone House is one of the most well known historical sites on the 12 location tour and our next stop. We took pictures, hoisted the kids up so they could see in the windows of the old tavern turned field hospital, and walked around. We spent two fun hours at Manassas National Battlefield Park. Not one of my kids asked when we were going to leave. We decided we wanted to save some exploring to do with visitors from out of town.  I resisted the urge to walk back into the visitor center and tell the woman behind the counter how wrong she was. My kids learned so much about the history of this country, but you know what? So did I.

Pamela Prado is a former TV news anchor turned stay at home mom, with a passion for social media. If she’s not rushing her kids to acting/modeling gigs (just don’t call her a stage mom) or taking them to dance, soccer, baseball, or school clubs, she’s heading out to explore the rich history of this area.