Got Crazy Kids? Cool, We Can Be Friends

Got Crazy Kids? Cool, We Can Be Friends 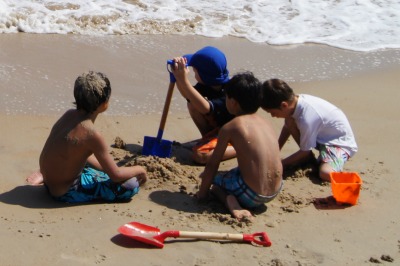 At 22, I became a wife, and a short two years later, I once again gained a new identity with the birth of our first child. Our friends at the time were all around our same age, but few had taken the leap into marital bliss, and exactly zero of our closest buddies had children yet, so we were the pioneers. There were more lovely times than awkward times, as mostly everyone was accommodating to us and our baby, and even more amazingly, continued to be so as he became a high-maintenance toddler. Soon, we began to realize that perhaps he was a bit more high-maintenance than some other children. In the years after his birth, we watched friends marry and become parents, too, and our social circles widened to include new families as our son grew older, especially after he started preschool.

Making family friends can be a tricky thing. I might get along well with a mom I met on the playground only to find that our husbands have nothing in common. Thankfully, we’ve been pretty fortunate, and in the 17 years we’ve lived in Maryland, we’ve connected with many families whose parents have become our Friday night hang out pals, our emergency contacts on school forms, and our confidantes in times of stress. Their children have become our kids’ honorary cousins, built-in mixed-age play group, and birthday party invitees. With no family in the area, we are thankful for our community of friends for all that they fulfill in our lives.

We recently went camping for a weekend with four other families, some we’ve known for over a decade, and others with whom we’ve only recently become close. In total, there were 10 adults and 13 children running amok across four campsites for three days and two nights. As the adults hung out in camp chairs and hammocks, chatting, drinking, and snacking, the children grouped up in various configurations, playing in the sand dunes behind our sites or riding bikes around the campground circuits. Every once in a while, we’d hear a loud protest about sand throwing or toy snatching, and the adults who matched the children involved would issue the requisite reprimands. My children were involved in some of these (damn that sand throwing!), but the cool thing was that they weren’t alone.

I’ve said it before as a joke, but it’s one of those reality-disguised-as-humor moments– I need to be friends with folks who have wacky kids. No “perfect children” allowed. Now, I know, there are no perfect children, and I do say this a little tongue-in-cheek, but I have come to truly appreciate the friendships I’ve made with other parents who struggle with parenting-related issues I can understand. The conversations are more comfortable when both of us are sharing frustrations or troubles, and it’s easier to help each other laugh at the crazy things we’ve found ourselves saying to our kids!

In some of my most desperate parenting moments, I’ve beseeched of my children in the midst of some conflict or another, “Do you think it’s like this in other people’s houses?!” Later, when I’ve cooled off a bit, I remember. Yes, yes it is. And I’ve been in those houses, and I love their families dearly.

At one end is a six year old, and at the other is a high schooler, with an eight year old in the middle, leaving Dawn in a variety of parenting stages all at once. When she’s not hiding in the bathroom, she can be found blogging at my thoughts exactly and reviewing books at 5 Minutes for Books.