The Ups and Downs of Watching Your Child Travel Through Adolescence

The Ups and Downs of Watching Your Child Travel Through Adolescence 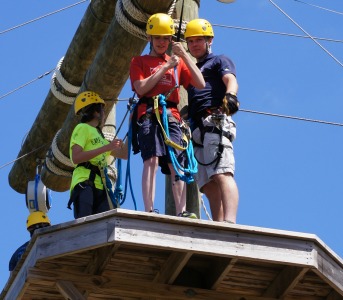 Peering over the edge of his last descent on the ropes course, I saw uncertainty on my adolescent son’s face through the zoom lens on my camera. He’d just spent the last hour flying through the trees in a manner that I could never, ever picture myself doing. One more leap, and he’d be back on stable ground. Safe, or at least, free of the risks of zooming around on ropes 400 feet above the ground. But since he’s still got about five years left of his time as a teenager, I’m pretty sure I’ll continue to feel as if it’s me up on that platform for at least that amount of time.

You know that old saying about the decision to have children being comparable to choosing to have your heart walk around outside your body? As my oldest child will soon turn 14, I’m understanding this sentiment in a whole new way. But the feeling has changed over the years, and while I don’t care to indulge in over-sentimentality, just hear me out.

Do you remember your own time as a teenager? I do, and let’s just say, it wasn’t all cheery. Damn, I was in a foul mood. A lot. I constantly heard about “my attitude” from my mother, and sometimes all I wanted was to lock myself in my bedroom. I believe being forced to spend time in the living room with the rest of family was doled out as some sort of punishment. Above all, I truly felt as if no one, especially not my parents, understood what it meant to be me, at that time, at that place in life.

Being on the other side of the scenario these days, I feel obligated to offer up sincere and plentiful apologies to my parents for that definite attitude, because being on the receiving end of it absolutely sucks. And what I really wish my son could understand is that I do, in fact, get it. I remember my teenage years, really quite vividly, and I’m not sure that being the parent of an adolescent is any easier than being the acne-prone, awkward-at-times, moody teen himself.

See that’s where that quote about your heart walking around outside your body comes in. It is more painful than I ever could have imagined to watch my child go through the negative experiences that seem to be mostly inevitable in these years. Some issues are small, but others pack a bigger punch. Yes, I give reminders in regards to hygiene, because even though it’s his face, I’m the one handing over the cash for the dermatology copays. That doesn’t hold a candle, though, to some of the more difficult experiences he’s had in the last two years. Bullying may be a buzzword these days, but as a parent, you know it when you see it and hear about it day after day, after day, after day. Not that I ever held onto the notion that I could provide 100% protection for him from the negativity of the big world out there (nor that I ever truly desired to do so), it’s still quite a significant realization of how little power I actually have over what he will go through during this stage of life.

So, I try to balance things… offer a bit of advice here, a new exfoliating facecloth there, but then stand back and get out of his way, knowing that his path is certainly full of mistakes, embarrassments, and future regrets. And there’s really not a thing I can do to prevent them. Hopefully, he’ll learn (at some point) to listen to the bigger messages we’ve tried to instill, so that the negative experiences aren’t huge ones, and we’ll keep reiterating those messages as part of our regular parenting routine. With two more kids set to enter adolescence right as he’s exiting it, I realize that I’ll be standing up on the platform for many years to come, looking over the precipice with uncertainty until it’s my time to finally be lowered to what I hope will be more stable ground.

At one end is a six year old, and at the other is a soon-to-be high schooler, with an eight year old in the middle, leaving Dawn in a variety of parenting stages all at once. When she’s not hiding in the bathroom, she can be found blogging at my thoughts exactly and reviewing books at 5 Minutes for Books.