The Box Trolls Set Visit: 5 Things You Didn’t Know About the Movie

The Box Trolls Set Visit: 5 Things You Didn’t Know About the Movie 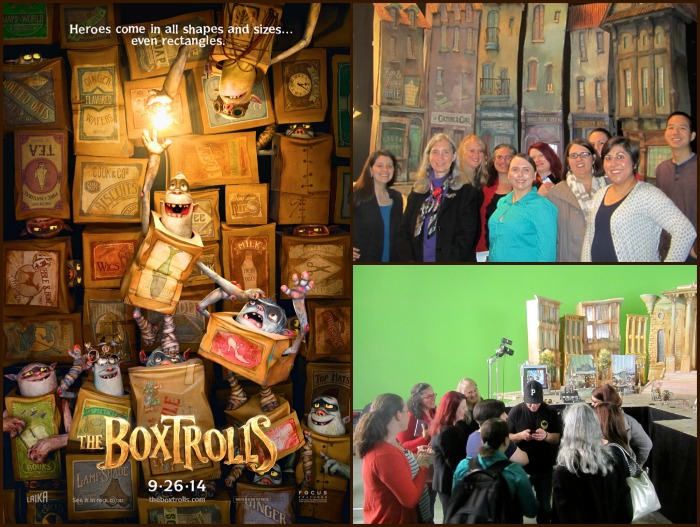 Long before I was invited to visit the set of “The Box Trolls,” I saw the teaser trailer for the film and thought, “I will see anything LAIKA produces.” My kids and I were already big fans of their previous films, “Coraline” and “Paranorman,” and “The Box Trolls” looked exactly like the sort of beautifully crafted, literary, clever family film we appreciate. I felt so lucky to get to tour the LAIKA studios in Portland this past April with a small group of bloggers that turned out to include my dear friend Nell Minow. But before I get into the details of the trip, you simply must watch the trailer and then circle Sept. 26 on your calendar, so you can remember to take your tweens and teens to see  it this fall!

So you watched the trailer? Good! Here’s the official synopsis of the movie, in case it wasn’t clear from the trailer:

A family event movie from the creators of “Coraline” and “ParaNorman” that introduces audiences to a new breed of family – The Boxtrolls, a community of quirky, mischievous creatures who have lovingly raised an orphaned human boy named Eggs (voiced by Isaac Hempstead-Wright) in the amazing cavernous home they’ve built beneath the streets of Cheesebridge. When the town’s villain, Archibald Snatcher (Academy Award winner Ben Kingsley), comes up with a plot to get rid of the Boxtrolls, Eggs decides to venture above ground, “into the light,” where he meets and teams up with fabulously feisty Winnie (Elle Fanning). Together, they devise a daring plan to save Eggs’ family.
Directors: Anthony Staachi and Graham Annable
Voice Cast: Ben Kingsley, Isaac Hempstead-Wright, Elle Fanning, Jared Harris, Toni Collette, Simon Pegg, Nick Frost, Richard Ayoade, Tracy Morgan

And now, five things you didn’t know about the movie!
1. It’s based on a book! I’m a huge page-to-screen nut who loves seeing adaptations of books I’ve read, even if they turn out really different the source material. “The Box Trolls” is based on “Here Be Monsters” by author-illustrator Alan Snow. The filmmakers had to change quite a bit when translating the book into a movie, but the spirit and style of the book is still present in the film, which focuses on the box trolls characters, who play a supporting role in the novel. The middle-grade illustrated series has been called a Roald Dahl-esque “inventive fantasy ”  that features “short chapters, intriguing creatures, quirky humor, and engaging art” for young readers.
2. It took thousands of miniature props to make the movie: Working on a stop-action animated film requires craftsmanship, patience, and an attention to detail that’s unparalleled in the film industry. For example, more than 20,000 props were handmade for the movie, including 55 different sculpts of prop cheeses, and a teeny tiny sewing thread and needle. Walking around the studio, one quickly realizes that the kind of people drawn to stop-action animation could just as easily be artisan entrepreneurs with shops in Brooklyn or their native Portland.
3. It takes forever to make these movies: LAIKA’s productions are clearly labors of love, taking much, much, much longer than regular computer-animated movies to complete. An animator typically took one week to complete just 3.7 seconds worth of footage, which is just under 90 individual frames. Earlier I said it takes patience, but producer/LAIKA CEO Travis Knight likened the process to solving a math problem or playing chess; both require intense focus, not just the willingness to wait and figure things out. Knight was working on the final shot of the film (at one point there were 30 animators working simultaneously, but by the time we visited in April, it was down to Knight and this last 45-second shot). He joked that the slow and meticulous form of filmmaking is “the worst possible way to make a film. But there’s something magical about stop-motion animation.”
4. This is LAIKA’s first “period” film: Both “Coraline” and “ParaNorman” take place in the present, but “The Box Trolls” is set in a fictional Dickensian village of Cheesebridge. It’s not exactly England, but it’s clearly the past, in a city that’s vaguely European with elements from all over the place. One of the best parts of the tour was seeing the inspiration boards for all the characters and seeing everything from contemporary singers to the Russian ballet to movies like “Gangs of New York” and “Oliver!”
5. LAIKA CEO Travis Knight isn’t just a finance guy: It would be easy (and incorrect) to assume that just because Travis Knight is the son of Nike CEO, Portland-based billionaire (according to Forbes, he’s the 43rd richest person in the world) Phil Knight, that he’s just the money behind the operation. But Travis is no dilettante, the directors stressed. He’s actually an accomplished lead animator who has worked on all the films he’s produced with LAIKA. So he’s not just the LAIKA boss, he’s one of their own.
And now watch the behind-the-scenes teaser: