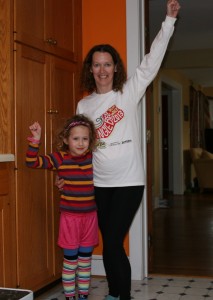 Last Fall, I decided to take up running. In part, it keeps me busy during soccer and baseball practice, as well as drop-off birthday parties. I get to exercise while the little people have fun, leaving me with little guilt about taking time out for myself. But some days, none of these built in excuses to run come up – and often, these are the days I find my children climbing the walls inside. So I decided to send them running.

At first, my children resisted. I suppose they prefer complaining about there being “nothing to do” to admitting that a whole world outside awaits – if only they’d lace up their sneaks and take advantage of it. I signed my 8 year old up for a Jingle Bell 5K in Arlington – and my husband took on the task of training him to run a steady pace, rather than his natural fartlek style. They finished the race together, clocking 11:53-minute miles. He was super proud of himself. He decided he wanted to drop his time for the next race, and said he was going to run with me more often. But…sleet, snow, rain, snow, wind, and snow have relegated his runs to mostly being the “go out and run around the block – you are making me crazy” kind of runs.

But recently, my amazing running group, Moms Run This Town, has hosted kids’ runs. And do you know what? My children and I are having a ball running with other moms and their children. We hit the streets and trails and then wind up at a watering hole for hot cocoa, cookies, or some other treat. We’ve been adding up our miles on a “pile the miles” chart we created, which has really motivated my six year old. She’s going to crush her goal of 20 miles for the year. My eight year old will likely crush his goal of 40 miles for the year. My 1,000 annual miles are a bit more in question at this point.

Huge props also to Girls on the Run – an organization dedicated to empowering girls through running. Every person I know that has a middle school aged daughter participating in the program says awesome things about. I hope to run with my daughter in this program when she’s old enough!

Here’s what I’ve learned about running with my kids.

There are loads of family racing events in the area. The Arlington branch of the Potomac River Running Company is hosting a run on April 2 that’s family friendly. It’s their Rock N Roll Las Vegas fun run – complete with prizes! Elementary schools regularly host runs. In fact – I think you can find one every weekend from now until school is out. The Glebe Elementary 1 mile fun run and 5K will be on May 10! My children will be running the whole thing! You can find lots of area runs right here.

It’s spring! Now is the time to get out there and strut your stuff!

Elaine blogs at Connor and Helen Grow Up! Her recent fascination with running has led her to boldly proclaim she will run a marathon in Boston qualifying time at some point. Her current problem is not that she’s too slow – she’s too young!