Middle School Woes: How to Ask About Girls

Middle School Woes: How to Ask About Girls 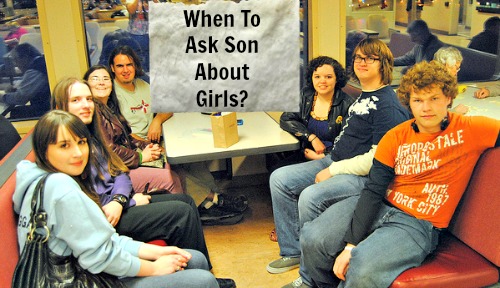 My son has always had female friends, but until this year, there was nothing remarkable about it. In elementary school, it’s totally normal for boys and girls to have play dates, invite one another to birthday parties, exchange favorite books, and eat together at lunch. One of my son’s very best friends from elementary school is a girl, albeit one who is out of the country (except for summers) until  they start high school. I remember thinking to myself when we bid her farewell: 1. I hope they stay in touch 2. They are in for a world of change seeing each other in just the summers.

Now one grading period into middle school, it’s clear that our son is at not-quite-12 one of the bigger kids in the class. I’d say handsome too, but that sounds braggy, and I try not to be one of those moms who goes on and on about how beautiful her children are — we all think that, don’t we? Anyhow, let’s just say that while many of his classmates are on the local train to puberty, my son is on the express. I kind of figured this would happen, given how quickly I developed and then basically stayed the same height while my friends shot up around me, but it’s different when you’re witnessing it in your own kid.

What I didn’t realize would be a consequence/side-effect/result of his height and build and charming personality is that girls, ever more mature and knowing in such things than boys at that age, would take notice. So all of a sudden there are girls e-mailing his school-issued email address. One time, I thought he was talking to Jimmy**, a friend he’s known for years, about math, but when I walked into my office (where he does some of his homework), I heard a girl’s voice and realized he was Google Voice chatting with a girl I’d never met.

“Who are you talking to? That’s not Jimmy” I asked, trying to make sure I was out of the camera’s line of sight (I didn’t want to scare the poor girl).

“Lana,” I repeated, trying on this new-to-me name. “Are you working on a project together” (the last time he was Google Voicing, it was with his group on an English project).

“No,” he answered and then proceeded to give me absolutely zero details.

Now, I don’t really think my son was doing anything wrong. He didn’t jump back in surprise when I found him chatting, and the door to my office (as per our rules when he uses it) was wide open. When he left his email logged in to our computer and I had to log out, I noticed that in addition to his male friends there were several girls’ names in the email archive. So now my husband and I, for the very first time as parents, are left wondering — should we ask about girls and the nature of these friendships? Should we just assume it’s all just sweet sixth-grade friendships?

We don’t really know if he “likes, likes” girls yet (he’s never mentioned any of them that way, he eats lunch exclusively with guy friends, and even when I asked him about “Lana,” he just said she was a friend from school) and feel so unsure about how to proceed. We don’t want him to think being friends, really good friends, with girls is a big deal or something worth suspicion or ridicule or even light-hearted teasing. But we don’t want him to think the concept of dating is appropriate at this age.

I’m fairly sure I sound crazy, but this whole boy-girl friendship never raised any flags before, and now it’s starting to feel fraught with possibility of feelings and heartache and confusion. How much of a role do parents play in this whole middle-school hormonal development? I need a Yoda to come guide us in the way of raising 11,12,13 year olds.

**All names and identifying characteristics have been changed to protect the young and clueless.