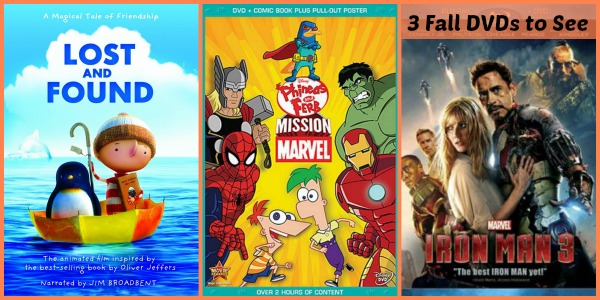 Fall is typically a fantastic season to head to the theaters without the kids, but the actual family releases tend to be limited to around the holiday weekends when the studios know families are having reunions. Instead, now that school and fall sports are in full swing, take a chance on these three titles that should please everyone from your preschooler to your tween/teen.

Disclosure: I received free review copies of each of the above titles.

For Tots & Young Kids: “Lost and Found” — This adorable animated adventure is the adaptation of author/illustrator Oliver Jeffers’ beloved 2005 picture book. Narrated by Jim Broadbent, the British production follows a little boy who discovers a penguin has shown up on his doorstep. Like our contributor Dawn, I’m a big Jeffers fan, so all of us loved this short and sweet DVD. Buy it on Amazon | Add to your Netflix queue

For Kids & Tweens: “Phineas and Ferb: Mission Marvel” — All three of my kids (ages 5, 8 and 11) are Marvel and Phineas and Ferb fans to varying degrees, so needless to say this video was a no-brainer in our house. The crossover (“Mooom, Phineas and Ferb are making a crossover!”) between the popular Disney cartoon and the comic-book legend has everything you’d expect from a Marvel+ P&F story, including the requisite Stan Lee cameo and a bunch of supehero jokes.  Buy it on Amazon

For Tweens & Teens: “Iron Man 3” — My 11-year-old son was dying to see the “Iron Man series, and somehow he ended up watching the three movies in backwards order after seeing “IM3” in theaters. It didn’t matter much, since they’re all easy-to-follow movies. If your tween/teen has seen “The Avengers” or the previous “Iron Man” installments, definitely see the third film, so they can see the always excellent Robert Downey Jr. come to terms with what makes him tick and what makes him vulnerable.  Buy it on Amazon | Add to your Netflix queue