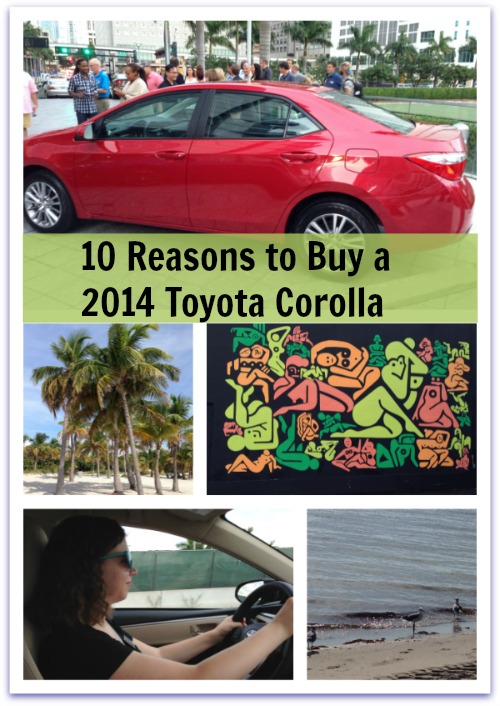 The DC Moms was invited to attend the press launch of the new 2014 Toyota Corolla in Miami, Fla. two weeks ago. I decided to attend, because when we first looked around to buy my husband a commuter car several years ago to drive 50 miles roundtrip each day, we seriously considered the 2008 Corolla. We knew it was usually considered a “first” or “entry level” compact, but it offered amazing gas mileage, a bigger than expected interior, and the unparalleled reliability of a Japanese sedan. In the end, we didn’t go with the brand-new Corolla that day, but after spending two days with the newly redesigned 2014 Corolla, I would have no qualms suggesting my husband check out the Corolla S or LE, my favorite of the four trim levels, when it’s time for him to replace his car.

Here are 10 reasons to seriously consider the new 2014 Corolla:

1. It’s bigger than previous models: Because I drive a minivan, most cars feel small, but the 2014 Corolla was surprisingly roomy. Seriously — way, way bigger than the one we test drove five years ago — the last time Corolla was redesigned. According to “Car and Driver,” the new Corolla “has 41.4 inches of leg space for rear-seat passengers, 4.6 more than in the mid-size Chevy Malibu and even an inch and a half more than in the full-size Impala.”

2. The S grade is sporty and fun: From the piano black exterior trim to the eye-catching rims to the contrasting colors of the Softex leather-like seats, everything about the S is sportier than the LE. I don’t have a lot of experience driving compacts, so I can’t say how it compares to to Honda Civic, the Ford Focus or the Mazda 3, but during our test drive, Jessica and I were both impressed with the responsiveness of the brakes, the steering, and the acceleration.

3. The LE Eco is green-friendly: While I loved driving the S, and I think it’s the one my husband would most appreciate, I think the LE Eco is the best if you know you’re going to put a lot of miles on your car each day. I’m an entertainment reporter, not a car writer, so I once again defer to Car and Driver” for their explanation of why the LE Eco is such a win for Toyota: “Despite adding 2.6 inches of length and half an inch in width, the specially equipped LE Eco climbs by 4 mpg city and 8 highway to an EPA-estimated 30/42 rating. That 42-mpg highway number is for a base Eco with 15-inch steel wheels, but the 40-mpg rating affixed to Ecos with the optional 16-inch aluminum wheels of our test car still approaches diesel and gas-hybrid territory.”

4. Toyota Upped the Style Factor: Let’s face it, you don’t think of Corolla when you think of a stylish sedan. As New York Times auto writer said: “If the previous 2013 Toyota Corolla were an actor, it would be the faithful sidekick: the average Joe who always comes through, no matter what scrapes his buddy — the flashy, daring, irresponsible star — gets them into. He would be the guy you can count on. But he would not get the girl.” But the 2014, is as the Times put it, “longer, lower, wider and just a little bit wilder.” That little bit goes a long way, and the aesthetics are a lot less forgettable or “camouflagey” as the previous model.

5. The trunk and passenger space are huge: As a parent, space is important, even if you’re trying to keep your car on the small side(because you live in an urban area, want better gas mileage, have one family car and one compact, etc.). The trunk was considerably deeper than a compact SUV’s, and the backseat has so much legroom for an adult that my fellow blogger Jessica, who is a tall woman, was able to spread out in the backseat. 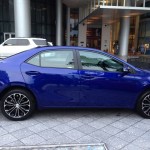 The new Corolla S is surprisingly sporty and that cobalt blue is beautiful. 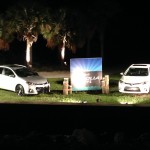 Corolla Cove: the team treated us to dinner on a private cove. 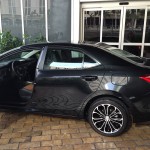 My new friend Jessica and I toured Miami for three hours in three different Corollas. This is another S. 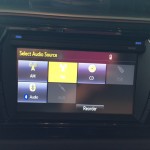 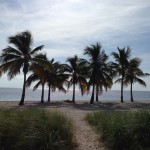 Isn’t Miami gorgeous? I had forgotten how beautiful (and hot!) it is there. 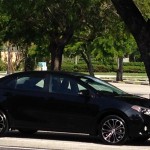 Our temporary Corolla S parked under a tree at Crandon Park. 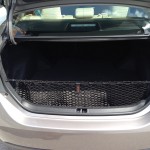 Jessica and I guessed we could fit two strollers and a Costco load of groceries. 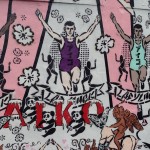 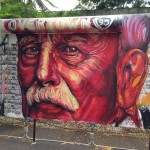 One of the best parts of the press event was a guided walking tour of Wynwood Walls. Here’s a door by Gaia depicting Henry Flagler. 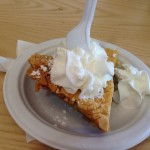 What better way to finish two amazing days driving and walking and eating but with pie!

7. The Entune App Suite: When I drive, I need to be able to listen to SiriusXM or my iPhone’s various playlists, but I love that newer cars offer even more multimedia features like the Entune App Suite (available on the LE and S), which allows you to connect not just to satellite radio and your smartphone, but also provides a navigation system, back-up camera (am I the only one who feels weird in cars without a backup camera at this point?), and shortcuts to use Pandora, OpenTable, iHeartRadio, etc.

8. You can keep it forever: OK, maybe not forever, but Corollas can get you way past 200,000 miles, so the Corolla you buy for yourself today can be the car you can pass along to your kid in 5, 7, 10 years! That’s not even an exaggeration: Here’s a family that has chronicled how their 2000 Corolla has more than 300,000 miles. Their daughter was three when they bought it, and now she drives it!

9. It’s a great first car or graduation gift: Have a high-schooler who needs a car for school, work or in preparation of college? This is not a car that’s going to let you down; you know it’s going to be a safe car for your teenager to drive without sacrificing the style and amenities that they’d want in their first vehicle. On a personal note, my sister and her husband bought their 18-year-old daughter a 2006 Corolla in May, and despite two car accidents (one caused by their 18-year-old daughter and one by their 16-year-old son), it’s still running, and their teen drivers are completely fine.

10. It’s all about the QDR: With compact cars, it’s not flashy, fancy trim or inches and inches of storage space that take precedence but Quality, Durability and Reliability — what you’ve come to expect from a car brand like Toyota. What’s more, the Japanese auto company has factories in the U.S., so Corollas are actually made in the U.S.A.!


What was your first car? Have you ever owned a Corolla? If you have one now, how many miles have you put on it?

Disclosure: Toyota provided airfare and accommodations during the East Coast Press Event. No monetary compensation was provided for my editorial coverage, and all opinions are my own.

Sandie is the Editor in Chief of The DC Moms and blogs about Young Adult literature at Teen Lit Rocks and reviews movies and books at Common Sense Media.