Wear That Baby: The Benefits of Babywearing

Wear That Baby: The Benefits of Babywearing 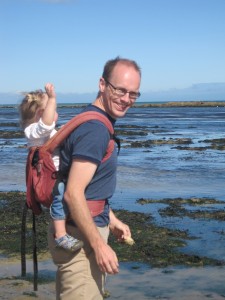 Works with Dads too!

At some point during my first pregnancy, most of which I spent in a low-pressure job surfing the Internet and not even pretending to try to look busy, I first saw the term “baby-wearing.” That’s cute, I thought, and seems practical. Strapping a tiny baby to your chest certainly takes up less space than a giant travel-system stroller. I might look into that, I thought.

And so began my obsession with slings, wraps, and carriers. Over two babies, I’ve had a Hotsling, a Baby Bjorn, a Moby wrap, and an Ergo. I’ve engaged in heated discussions about the merits of ring slings and Didymoses, facing in vs. facing out, hip carries and back carries. I can fling a wrap around my torso with a flourish, like a conductor doing up his bow-tie. I can maneuver a pre-walking baby onto my back in an Ergo while standing. (If you’ve never tried it, that’s trickier than it sounds. You have to practice over the sofa first.)

I’ve worn babies on planes, trains, and boats (but not in automobiles). I’ve vacationed overseas for three weeks with a baby carrier and no stroller at all. I’ve piggybacked a toddler while wearing a newborn on my front. I’ve pushed a preschooler in a stroller while wearing a toddler on my back. I’ve come to the realisation that the stroller is really just a thing we bring along to carry all the baby stuff – diaper bag, my purse, change of clothes, my coat, shopping – while I wear the baby. I’ve seen mothers carrying their babies on one arm while trying to push the empty stroller with the other hand – obviously one of those babies or one of those days when they’re perfectly happy in your arms, and the devil incarnate out of them – and thought, “There’s a woman who needs to invest in a baby-wearing device.”

We’ve always had a stroller as well, but wearing the baby helped us get around that awkward “Double stroller or not?” question that arises when your children are two and a half years apart and you know the older one should be walking but sometimes that’s just not going to happen. Sometimes you can switch the baby out of the stroller at naptime, put the toddler in, and wear the baby; and everyone is happy. You’re happy too, even if you’re wearing one load and pushing the other, because at least they’re getting the nap you know they needed, and with a lot of luck you might even manage to sit down and have a cup of coffee in peace before anyone wakes up.

So if you’re wondering whether or not to wear your baby, please do. Do some research, try out some slings or wraps or carriers (my recommendation would be an Ergo: I used that thing daily for two years, and then over again for the second child), and then register for it, search e-Bay for it, splash out on it, Craigslist it, thrift it, or borrow it; one way or another, I think you won’t regret it.

Christine doesn’t wear her babies any longer because they’re too busy dashing around on their bikes and scooters, making her think wistfully of the old days. She still blogs, though, at Awfully Chipper. Photos are her own.