I didn’t expect to be blown away.

The main reason I went out to a free class by Green Smoothie Girl Robyn Openshaw a few nights ago was to hand over a banner and other Holistic Moms Network materials to the new Burke/Springfield chapter‘s co-leader Lisa, who was going to set up the HMN table this weekend at the third biannual Take Back Your Health Conference (TBYH). It had been a hot, dusty afternoon with my kids at Ticonderoga Farms, topped off with a long drive home in rush hour traffic. I really just wanted to take a shower.

But I had also been inspired on the green drink front last spring when I saw Lisa Wilson of the Raw Food Institute address the second TBYH conference. Her skin looked radiant, and the mom of three honestly looked younger than when I’d met her at an in-home cooking class five years earlier. She spoke of traveling from her home in Connecticut back to DC where she’d started the institute and that, after a period of eating a lot less raw food, her colleagues were stunned at how puffy and dull her face looked.

This talk inspired me to do more juicing, which saved me this past summer through a home renovation that tested my family’s patience and my tenuous health. Still suffering from the effects of long-undiagnosed celiac disease and adrenal fatigue, fresh juice was the only way I could take in raw foods for a long time; I simply couldn’t digest raw foods if I had to chew them. But for the first several months I was on the grain-free, starch-free GAPS diet to address my (worsened postpartum) digestive problems, it was all I could do to make all my homemade food, including bone broth. Juicing happened occasionally, but not with commitment.

After seeing Lisa made such an impression last spring, juicing this summer, while time-consuming, helped me get through a tough time when I was so stressed and busy that many days I couldn’t take the time to actually digest real meals.

So even though I still believe that a lot of my health issues were exacerbated by my years as a vegetarian and that going back to consuming animal products helped me regain my fertility and my health pre-kids, I have come to appreciate the raw foods movement. Even though I got a late start, I had a feeling that I would enjoy Robyn’s talk. 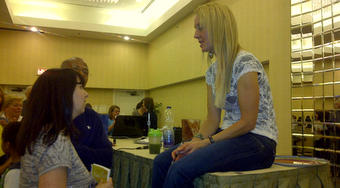 Indeed, I had no idea that it would be so inspiring. After hearing what she went through with her children and how raw foods improved their health, I am going to get serious about making sure my kids have fresh green foods with all meals. Raw foods carry the enzymes we need to break down our foods. Studies done decades ago by Dr. Francis Pottenger and more recently by “Raw Family’s” Victoria Boutenko (and Robyn herself) speak to the benefits of a raw foods diet.

And so does Robyn’s experience. She shared her story, and I was so moved by hearing about her son, who suffered such terrible breathing problems as a baby that he’d already been given Prednisone, a steroid, multiple times at only 15 months old. Robyn began a journey that led her away from dairy and processed foods and onto raw foods.

Seventeen years later, the boy who was on bronchial dilators through the night just to keep breathing is now a healthy, athletic six-foot-two. Within 6 months of his family going switching to a raw foods lifestyle, he went from Failure to Thrive to the 95th percentile in height. It was only after Robyn consulted an alternative practitioner who recommended a diet that was 60-80% raw and 95% plant-based that she saw his health turn around. The day she sobbed on the way home after a doctor told her she had no other options than steroids was the worst day of her life that “became the best day” of her life because it spurred her to seek alternatives that have helped her and her three other children, who haven’t needed antiobiotics in all these years and who rarely even go to the doctor. What a striking difference after all the interventions Robyn’s son needed back in 1995.

My own kids are reasonably healthy, but with a mom who had so much ground to make up after years of undiagnosed illness, they didn’t exactly come into the world with a full scorecard. They have some issues I’d like to clear up, including seasonal allergies. They sometimes help me make juice and sometimes drink some, too, but I am now going to try to make green smoothies a daily part of their breakfast.

Robyn said she’s still a fan of salads but explained that the fine chopping of greens into smoothies “breaks open the cell wall” of foods to make their nutrients more bio-available. And it makes them easier to drink! So now I will really start using that Vitamix of mine. I picked up a few of Robyn’s books for inspiration and with the intention of sharing with my mom, who is trying to keep her kidney failure at bay and is hoping to wean herself off of sugary drinks.

I expect that this weekend’s TBYH conference will only inspire me more, with all the talks about green foods, seasonal eating, and cleansing.

Speaking of cleansing, I’m so glad I made it to Robyn’s event, even if I was dusty and unshowered, and I’d had a week of a lot of work evenings. It was so worth the small effort! I felt great all day yesterday drinking my own green smoothie. 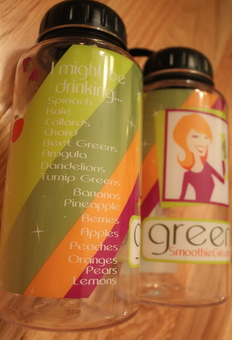 After a summer of carrying around my juice in a jar, I’m looking forward to using Robyn’s new wide-mouth BPA-free smoothie bottle. Anticipating the “what are you drinking?!” questions that inevitably come when people see you drinking something that looks like sludge, the bottle lists on the outside some of the healthy ingredients that might be on the inside.

So drink, teach, and be healthy!

Jessica Claire Haney blogs about living naturally (most of the time) at Crunchy-Chewy Mama.