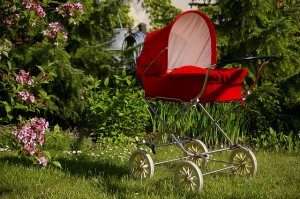 I’ve had strollers in my life for almost 15 years. The travel system with the snap-in infant car seat, the front to back double, the umbrella stroller, the jogger, the double jogger.

And then there was the red stroller.

It was an extravagant purchase for a fourth child. More for me than for her. But it came to symbolize much more than just a pick-me-up for a weary pregnant mom.

A few months before, I had purchased a fabulous maternity blouse on clearance. It was far too early in my pregnancy to be buying such things, and not long after, I miscarried. Later, I tossed the blouse in my donation bag with the tags still on it. I tempted fate by buying something for a pregnancy that was too early to be a sure thing and I lost.

Not long after, I was blessedly pregnant again and I saw an amazing sale on the red stroller – the one I had coveted for years but couldn’t justify buying when I already had a fleet of them in my garage. It was too early. I shouldn’t buy an expensive stroller for a baby who may not come to be. And yet, I knew that I would never be able to buy it at the regular price.

So I did it. I tempted fate and my barely-pregnant self dashed into the store one evening and bought that stroller. I tried to frame it as an act of confidence. But my heart was worried. I didn’t think buying it would cause me to lose the baby, but it would make it that much harder if I did.

And sure enough, a week later, my doctor called at 6:30 in the morning with concern in his voice. It was the beginning of a roller coaster of fear and worry that lasted the next 8 months. I taped the receipt to the box and put the stroller as far back in the storage room of my basement as I could shove it, to muffle its powers of doom.

When all was said and done, I had my baby. There was still plenty to worry about, but to me, she was perfect. And you never saw a prouder mama pushing her baby in that snappy red stroller.

Seven years has passed now and that stroller is still hanging around. Its red has faded. I move it periodically from my car to the garage and back again. My daughter hasn’t sat in it for at least 3 years. But she uses it for her baby dolls every now and then.

I’m having a hard time letting it go.

We cleaned out the garage last weekend and I moved it back into my car again, with a pile of things for donation. It makes me happy – seeing it back there when I’m loading up groceries, or pulling out towels for the pool. It reminds me of so many things… of that bold pregnant mother who bought it, the terrified one who couldn’t even look where the box was hidden, the joyful one – buckling her daughter into it.

I treasure the memories the stroller brings me, but I know it’s time for me to let it go. It’s time for another mother and another baby to make their memories with it. The red stroller was a defining symbol for a difficult time in my life that had a very happy ending. But a new chapter has long since begun.

Sue blogs at Laundry for Six.
photo via Flickr from credit_00