Giving Up in the New Year

Giving Up in the New Year 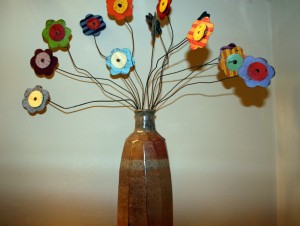 My most successful resolutions ever have been (1) drink more champagne and (2) bake more cheesecakes. These were about more. This year, I’m shooting for less.

Before I had kids, I spent several years learning to throw pots at Hinckley Pottery. By 2005, I was pretty good. I sold almost everything I had made in the prior year at the annual student show, because even though I knew I was going to have a baby in a few months, I never imagined I’d be leaving the studio.

I took what was to be a year-long sabbatical from classes and joined the Lee Arts Center so I could continue pursuing my craft. Unfortunately, six years later, I could count on my fingers how often I’ve made it into the studio. I miss those pots I sold.

For years, one of my New Year’s resolutions has been to get back in the studio. I’ve started attending lectures and workshops which really make me yearn to be back – but this year? I’m admitting it’s not going to happen. I’m giving up my precious studio membership. It’s hard to type those words. What makes it harder is thinking about all the times my husband has tried to help me with this goal.

Being a mom brings trade-offs, and one of the trade-offs it’s brought for me is not having chunks of time which pursuing pottery requires. I work part-time, so when I’m not working, I want to spend time with my kids – not my clay. And I don’t like feeling rushed – at the studio or at home.

This revelation of sorts for me has started me thinking – what else should I be giving up this year? According to my midwife, I ought to give up a few pounds. She noticed a few months ago that after returning to my pre-baby weight after the birth of my second child 4 years ago, I’ve put on 2 pounds a year. It’s not that it’s that much weight, but it’s the trend she’s concerned with. Nip it now, she says,  before I’m in her office in six more years wondering why I weigh 20 pounds more than I think I should. So put that one on the list – give up some pounds.

I gave up yelling a few years ago, but earlier this year, I let myself become so overcommitted and frustrated with life that I yelled at my older child when I should’ve been kicking myself for not paying enough attention to the situation. I’m giving up a few volunteer commitments that are no longer rewarding, and resulting in more stress than I can manage. This one is difficult for me, because I hate feeling like I’m leaving something to someone else that I could do. But really? I’m not doing it as well as I should.

I’m guessing we all deserve a break. What can you give up in the New Year to make life easier?

Elaine chronicles her children’s lives over at Connor and Helen Grow Up.