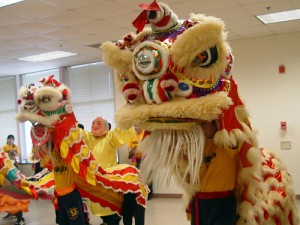 Monday, January 23 marks the new year for many Asian cultures like the Chinese and Vietnamese. This Lunar New Year is the year of the dragon, considered to be the most auspicious of all the animals. Whether your family personally celebrates or not, head out to one of the many Year of the Dragon festivities in the Washington, DC area and learn something new. Don’t forget to eat some good food too!

Rockville Town Square‘s Lunar New Year Celebration starts off with a parade. From 11AM-4PM on January 21, head to Rockville for an Asian street market, VisArts exhibitions, street performances, and plenty of children’s activities. Event is free.

Eden Center in Falls Church, VA has two days of Tết  celebrations, first on January 22 and another on the actual new year, January 23. On Sunday there are two lion dance performances and Monday includes a flag ceremony. While you’re there, make sure you hit one of the restaurants for authentic Vietnamese food and grab some banh mi to take home with you.  The Eden Center is usually crowded on the weekends, so it will be much busier because of Tết, so be prepared.

Bundle up and head out early on January 29 for a good spot for the DC Chinatown’s Chinese New Year Parade. We’ve attended this parade in the past and it never fails to excite the kids. There’s plenty of lion dances, performers of all sorts and lots of colorful costumes. Let’s hope it won’t be freezing this year! The parade starts at 2PM. Visit thewebsite for route information. I highly recommend taking the Metro to the Gallery Place-Chinatown stop. After the parade, head to one of the many Asian restaurants for a new year’s dinner.

For a more comprehensive list, visit Thien-Kim’s blog, I’m Not the Nanny.

Thien-Kim loves any excuse to eat as much Vietnamese food as possible, especially when she doesn’t have to cook it. She blogs about multicultural parenting at I’m Not the Nanny and her adventures in food and crafts at Cup of Creativi-Tea.