If your child was sick all the time, had terrible allergies, or suffered from severe eczema, and one thing cleared everything up, wouldn’t you get mad if someone got in your way of obtaining it, saying you had no right to buy it?

What if that thing was food, not medication?

Proponents of raw milk gathered last week at the FDA to protest the ban on the sale of raw milk across state lines and to rail against the government using taxpayer money to fund raids of small, sustainable family farms. 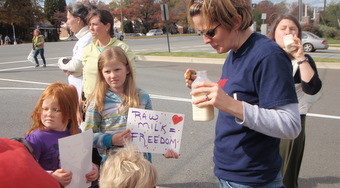 The “raw milk freedom riders” purchased raw milk from a farm in Pennsylvania and then traveled to Silver Spring, Maryland, where they joined 150 supporters gathered outside FDA headquarters and joined in a celebratory milk-and-cookies rally organized by the Farm Food Freedom Coalition. Members of the caravan could have been arrested for this act, which they say they should be allowed in a free country.

Raw milk was safely consumed for generations until unsanitary conditions in industrial farms led to illness. Proponents of raw milk — from grassfed cows on sustainable farms, not from feedlots — say it has healing properties and should not be the subject of restrictive policies.

Mother of four Kristin Canty watched her son go from suffering terrible allergies and being sick all  the time to becoming a perfectly healthy little boy once he began a diet that included raw milk and other nutrient-dense foods. No medications worked, but food did. “He’s now a healthy, athletic 16-year-old,” she told the crowd, calling on the FDA to support mothers in finding healthful solutions for their children. Canty was so upset to learn about raids against the kinds of farms that helped her family that she felt compelled to make the documentary film Farmageddon, which premiered this past June.

Canty owes much of her son’s turnaround to advice in the book Nourishing Traditions by Weston A. Price Foundation president Sally Fallon Morell. This weekend, the Foundation will be holding its annual Wise Traditions conference in Dallas, Texas. With the theme of “mythbusters,” the conference will feature many speakers who have dedicated much of their research and practice to promoting traditional foods and food preparation techniques.

The Foundation draws on the research of 1920s dentist Price, who traveled the world and found healthy teeth and bodies among peoples who stuck to their ancestral diets and poor jaw structure, mental illness and physical ailments among those who did not.

The foundation bearing his name thinks highly of raw milk and also of natural saturated fats (like butter, lard, and coconut oil), lacto-fermented foods, and animal protein, and they advocate soaking techniques for optimum digestibility of grains, legumes and nuts and seeds. This weekend’s conference features health and nutrition experts who will “take aim at myths about fats, salts, industrial sweeteners and plant-based diets.”

Although children are not the express focus of this year’s conference theme, they are always on the mind of Fallon Morell, who speaks often about nutrition for children and for pregnancy, including plenty of healthy fats and minimal processed foods. At last year’s conference, the Foundation released its alternate set of dietary guidelines called Healthy 4 Life in response to the revised USDA guidelines. The Gut and Psychology Syndrome Diet was originally developed by repeat conference speaker Dr. Natasha Campbell-McBride to help children on the autism spectrum. Another repeat speaker, Kaayla Daniel, a critic of soy, put her research into practice in feeding her adopted child.

Conference speakers and those at last week’s raw milk rally are passionate about food as medicine for people and about sustainable farming as necessary for the earth. I’ll be reporting from the conference here, on my blog, on All Things Mothering and in my column at The Washington Times Communities Family Today.

For more on the raw milk rally, see my column and many more press links on my blog.