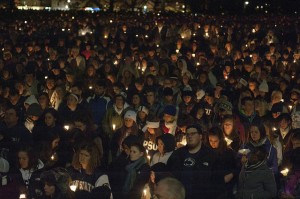 I grew up in a small town in central Pennsylvania and was a Penn State fan for as long as I can remember. (I consciously used the past tense there.) I loved watching the games with my dad and, even better, was thrilled to have the opportunity to actually attend a game every few years. Hearing the roar of the Nittany Lion, participating in the wave, shouting WE ARE or PENN STATE (depending on which side of the stadium we were sitting on) are amazing memories for me.

During my senior year of high school, one of my classmates was recruited to play football at Penn State. And Joe Paterno himself came to our school to give an assembly and officially welcome my classmate to the football team. If you aren’t from central Pennsylvania or didn’t attend Penn State, it will be hard for you to understand what a big deal this was. Let me just say that I cannot imagine anyone, anyone, getting a bigger reception at my high school than JoePa.

After I married an Ohio State Buckeye, my dad’s last words in his toast at our wedding reception were, “as long as you raise your kids to be Penn State fans.” Half the room erupted in cheers; the other half in groans.

Over the past few years as my Buckeye husband and so many others made jokes about Paterno’s age or frailty or insisted that after several losing seasons he needed to step down, I heartily defended him. In a sport fraught with so much scandal, winning at all costs, turning your head the other way (see also: Ohio State and Jim Tressel), I believed that Joe Paterno was the real deal. I believed in his motto “Success with Honor.” And more importantly, I believed that he believed in it.

And that’s just a bit of background to explain why I feel personally betrayed by Joe Paterno.

As I read story after story after story and the entire 23 pages of the grand jury report last week, I felt so many emotions: horror, sadness, anger…. But I also felt betrayed by a man I trusted. A man I looked up to, Joe Paterno.

And that feeling continued as I read his statements, “the Board…shouldn’t spend another minute thinking about my status.” And his parting message to football team and coaches, which one player summed up as, “Beat Nebraska.”

After making and hiding a mistake for more than a dozen years, Paterno had the opportunity last week to acknowledge his personal failure and to truly teach his players about “growing up and being men” and to “truly prepare them to be good men in life,” as former PSU linebacker and NFL Jacksonville Jaguar, Paul Posluszny once said Paterno did.

But, God willing, he has several more years left on this Earth and I desperately hope that during that time he does not spend single minute thinking about his many victories on the football field but instead spends it asking forgiveness from the many victims of Jerry Sandusky’s abuse.

It does truly sadden me that Paterno’s long and storied career has ended due to such an immense personal failure of moral responsibility. But, I believe that if he can truly acknowledge his failure, he still has some important lessons to teach.

Paterno will never truly redeem himself in my eyes but there are thousands of fans out there who still look up to him and who still believe in him. If he puts his heart and soul into teaching these lessons then maybe just a tiny bit of good can come out of this horrible, horrible situation.

Aimee writes about lighter things on her personal blog, Smiling Mama, and about family-friendly activities in Prince George’s County, MD at Out by Ten.